This Page Link
The New Abwehr Hypothesis of Operation Trump

Selected Posts and Searches
All Saved Stories In Brief – 250 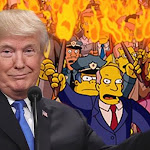 The Abwehr And The Jews
The Abwehr And The Jews – M.N.: This is a very important story. | Michael Novakhov on the New Abwehr hypothesis of the Operation Trump
M.N.: This is a very important story. It confirms my impressions, formed earlier, that the Orthodox Judaism in general, and its various offshoots , such as “Chabad Lubavitch” and other “Hasidic movements“, just like the State of Israel itself (God bless it), are nothing less and nothing more than the creations of the Abwehr and the New Abwehr (after WW2), which themselves were and are predominantly half or part Jewish, especially in their “top heavy” leadership circles, including Canaris himself and most of his commanding officers, as exemplified by this particular one described in this article.
It was a historically formed and a historically determined circumstance: the ethnically German junkers looked down upon the Intelligence work which, as they felt, was not compatible with their ideal of the “honest military service”, and they gladly or by necessity gave this area to the Jews and part Jews to manage. Another half of this formula might have been in the objective military observations that the smart, creative, ambitious, and quite German-wise patriotic Jews were simply much better and more efficient in this area, and they accepted and practiced this observation as the rule of their science and arts of wars and espionage.
For the half and part Jewish Abwehr officers this “half and half” became their ideal and their elaborate “philosophy“: the fusion of the Germanic and the Hebrew Spirits and their best embodiment and representations (in the high Abwehr officers, of course).
It also included the criteria for the personnel selection; most of the Abwehr high officers do LOOK half or part Jewish.
This point is very important for the understanding of the Abwehr’s and the New Abwehr’s psychology, outlook, and the nature, the character, and the distinguishing, the “diagnostic” features of their operations.
The New Abwehr apparently, influences and manipulates the Orthodox Judaic movements, especially their pet project, the “Chabad Lubavitch” and other “Hasidic movements” quite heavily and almost absolutely invisibly, masking and advertising their “Putin connection” as the quite efficient, convenient, and convincing cover.
These issues need the sophisticated and in-depth research.
With regard to Trump Investigations, this assumption, or the working hypothesis, as described above, has the direct bearing and is a factor in understanding the Sphinx The Regent Jared Kushner, his family, their origins, and the origins of their wealth.
The so called “Bielski Partisans” absolutely could not exist, function, and survive (quite nicely, with the trainloads of the robbed Nazi Gold and jewelry, which they later invested in the US real estate and other successful business ventures-rackets) without the overt or tacit approval and consent from the Abwehr which controlled everything on the occupied territories.
The Kushner Crime Family was the tool: kapos and the enforcers for the Abwehr. They became their money launderes and money managers after the WW2, when Abwehr moved them to the US.
The Trump Crime Family was the long term Abwehr assets, starting from Frederich Trump, Donald’s grandfather, who run the bordellos for them, and including Fred Trump, Donald’s father who built the “economy” housing for the newly arrived Abwehr agents, mixed into the mass of the legitimate refugees, and who also became the money launderer and the money manager for the Abwehr and the New Abwehr.
Recently they (the New Abwehr planners) decided to merge these two families into a singleTrump-Kushner Crime Family, in what was clearly the arranged marriage between Jared and Ivanka, in preparation and as the first step towards Operation Trump. It was helped, as the apparent second step in this arrangement, by Wendi Deng the “Chinese spy”, as alleged and circulated by Rupert Murdoch, her husband at the time. Both of them, just as, hypothetically, the FOX News Corporation were (and are?) heavily influenced by the New Abwehr. For Murdoch this proclivity apparently also runs in a family.  This is the apparent pattern of this prudent way of family recruitment; universally, and for the Abwehr in particular.
This aspect is also important for the understanding of the role that Felix Sater and his “Chabad” sect played in the “Trump – Russia Affair“.
This thesis about the connection between the Orthodox Judaism and Abwehr is also consistent with the “Abwehr Diagnostic Triad” which was formulated by me earlier, as consisting of:
1) Judeophobia (as the psychological product of these described above circumstances: the Abwehr half Jews were the GOOD (half) JEWS, all the rest were “very bad, sick, and contaminating” Jews),
2) Homophobia (the so called “Internalized Homophobia“, stemming from the personal aspects of the Abwehr leadership and reflecting the general, very permissive attitude towards homosexuality among the German military circles before and especially in the aftermath of the WW1), and
3) the specific Austrophobia or the so called Anti-Austrian sentiment (distrust and hate of all things Austrian), which stems from the Austro – Prussian War of 1866 and from the Austria–Prussia rivalry.
In the “Trump Affair”, the Austrophobia aspect is expressed by the New Abwehr planners in the concept of the “decadent and dishonest, not to be trusted”, part Jewish, Hapsburg Group, and this circumstance can be viewed as the particularly “telling”, or highly suggestive and indicative, “pathognomonic“, of the Abwehr operations.

Ernst Urhlau
Photo: Ernst Urhlau, former chief of BND and later the “consultant on geopolitical risks” for the Deutsche Bank, and the political ally of Gerhard Schroeder. Uhrlau was the chief of the Hamburg police when the core group of 9/11 hijackers, the so called Hamburg Cell, lived and received training there. He was uncooperative and hostile towards 9/11 Investigation inquiries.
Feed Integration by RSS Dog.
–
__________________________________________

January 24, 2019
M.N.: Canaris’ love affair with Reinhard Heydrich, both of whom were at least in part Jewish and Gay… This circumstance helps to understand the true psychological and psychohistorical roots of Fascism, of Abwehr, the personalities of its founders, the New Abwehr, and its many operations, including The Operation Trump.

M.N.: Canaris’ love affair with Reinhard Heydrich, both of whom were at least in part Jewish and Gay… | The Global Security News.
This circumstance helps to understand the true psychological and psychohistorical roots of Fascism, of Abwehr, the personalities of its founders, the New Abwehr, and its many operations, including The Operation Trump.

1:55 PM 9/5/2018 – Canaris’ love affair with Reinhard Heydrich, both of whom were at least in part Jewish and Gay… | The Global Security News

Upon the rise of Adolf Hitler and the Nazi Party in Germany, gay men and, to a lesser extent, lesbians, were two of the numerous groups targeted by the Nazis and were ultimately among Holocaust victims. Beginning in 1933, gay organizations were banned, scholarly books about homosexuality, and sexuality in general, (such as those from the Institut für Sexualwissenschaft, run by Jewish gay rights campaigner Magnus Hirschfeld) were burned, and homosexuals within the Nazi Party itself were murdered. The Gestapo compiled lists of homosexuals, who were compelled to sexually conform to the “German norm.”
________________________________
I have to puzzle you, my dear readers, with the most outrageous and at the same time the most logical theory and explanation of the origins of fascism: it sprung from the mind of Wilhelm Canaris, first as the “natural adaptive mechanism” and later as the most forceful protest against the antisemitism and homophobia; and it was emotionally rooted in his gay love affair with Reinhard Heydrich, both of whom were at least in part Jewish and Gay.
The details have to be elucidated, all the information has to be reprocessed and re-conceptualized, but that’s how it looks like, at least to me, and presently.
M.N.
1:53 PM 9/5/2018
_________________________________________________