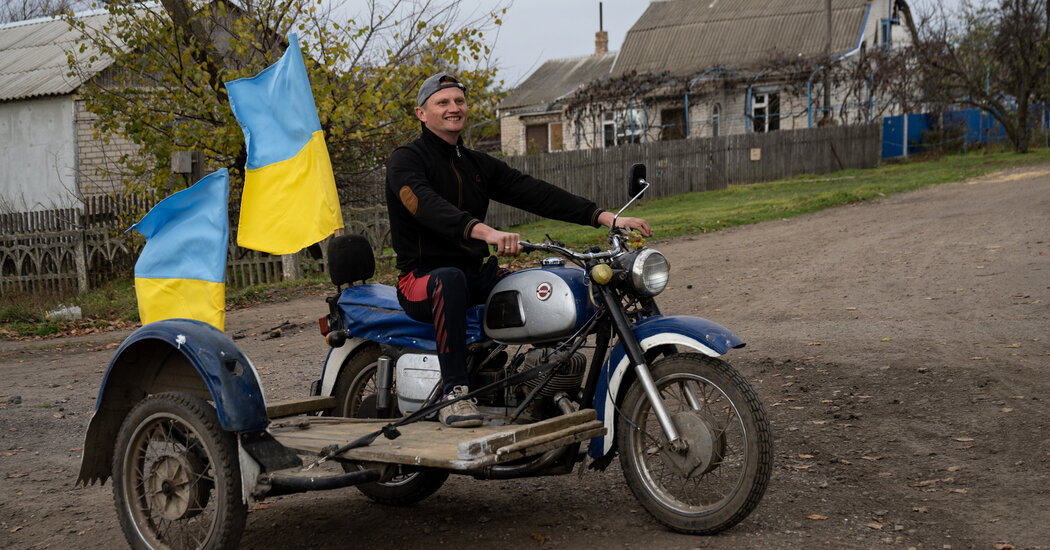 Outside Kherson, abandoned clothes, food and ammunition are signs of a hasty Russian withdrawal.

BLAHODATNE, Ukraine — In the villages west of Kherson, there were signs of a hasty Russian retreat and faltering efforts to slow the Ukrainian advance on Friday.

Ukrainian soldiers explored one abandoned Russian base, in a warehouse in the village of Blahodatne, poking through heaps of clothes, books and canned goods.

Russian military uniforms were crumpled in a heap on the floor of a sleeping area. The beds had been left rumpled. Clothes dried on a clothesline.

Nearby, a warehouse was packed with green wooden boxes of hundreds of rounds of abandoned Russian mortar ammunition. Some shells had been laid out on the warehouse floor, the detonators already screwed into the explosives, prepared to be fired quickly.

“They left in a hurry,” said Serhiy, a private who asked that only his first name be made public, according to Ukrainian military protocol. “They were preparing to shoot us with this ammunition, but they didn’t have time.”

Dmytro, another private, said, “They left without a fight.”

Through the day on Friday, Ukrainian military vehicles rolled past the village, moving eastward under a low, overcast sky along the main M14 highway, leading toward Kherson.

Remnants of the long battle for the city were seen on the road into villages reclaimed by Ukraine on Wednesday.

Along the highway, birch trees had been felled by artillery, telephone cables slumped onto the road and the metal guardrails were twisted and perforated with shrapnel. .

Occasional distant thuds from artillery were heard, possibly fired from Russian positions on the eastern bank of the Dnipro River. But Ukrainian media officers said that fighting was still raging a few miles from the city of Kherson. It was not immediately possible to independently verify the claim.

The road to a town liberated from Russian troops in Blahodatne, on Friday.Credit…Lynsey Addario for The New York Times

To the west, in Blahodatne, a small cluster of brick houses surrounded by fields on the open steppe, residents said that the Russians had withdrawn quietly overnight Wednesday to Thursday.

“There was no fighting, they left peacefully,” Yevgenia Khaidayeva, 82, said of the Russian pullback from what had been a defensive line to the northwest of Kherson city, passing just outside Blahodatne.

On Friday, a man who residents said was a local schoolteacher drove a motorcycle festooned with two Ukrainian flags, which fluttered as he sped about the village roads, honking and cheering “Glory to Ukraine!”

Not everyone was in a buoyant mood. Vadim Slabodyanyuk, a school security guard, stood leaning on a bicycle and blankly watching the Ukrainian soldiers pass by in trucks.

His mother and his father had been killed in artillery shelling from the Ukrainian Army during fighting over the spring and summer, he said. “And I buried them both under shelling” in the local cemetery, he added. He said it was difficult to accept that his own country’s forces had fired into his village.

Locals described a sense of slumping morale in the Russians stationed in their village, going back months.

Maria Akimona, 73, a retired milkmaid, recalled that over the summer, a Russian soldier had told her that he had a 1-year-old son and that he had said, “I won’t see him taking his first steps.”

She added, “I asked him what he was doing here, and he said he didn’t understand.”