by A.C. Thompson and Ford Fischer

This story is part of an ongoing collaboration between ProPublica and FRONTLINE that includes an upcoming documentary.

Members of the ultranationalist street gang known as the Proud Boys were easy to spot at the protests that flared across the United States throughout 2020, often in the middle of a brawl, typically clad in black and yellow outfits.

Never miss the most important reporting from ProPublica’s newsroom. Subscribe to the Big Story newsletter.

But in December, as the group’s leaders planned to flood Washington to oppose the certification of the Electoral College vote this week for President-elect Joe Biden, they decided to do something different.

“The ProudBoys will turn out in record numbers on Jan 6th but this time with a twist…,” Henry “Enrique” Tarrio, the group’s president, wrote in a late-December post on Parler, a social media platform that has become popular with right-wing activists and conservatives. “We will not be wearing our traditional Black and Yellow. We will be incognito and we will spread across downtown DC in smaller teams. And who knows….we might dress in all BLACK for the occasion.” 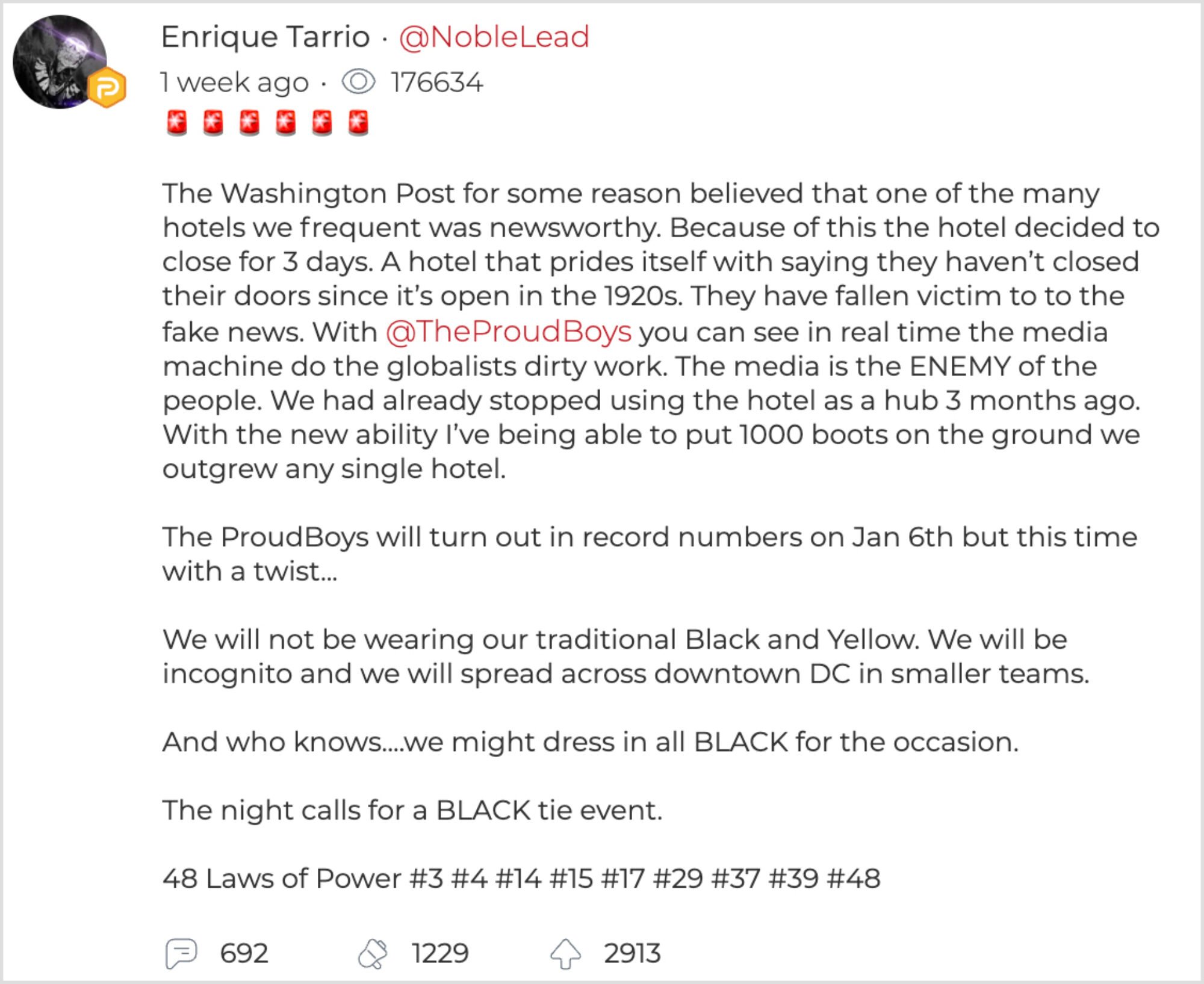 The precise composition of the mob that forced its way into the Capitol on Wednesday, disrupting sessions of both houses of Congress and leaving a police officer and four others dead, remains unknown. But a review by a ProPublica-FRONTLINE team that has been tracking far-right movements for the past three years shows that the crowd included members of the Proud Boys and other groups with violent ideologies. Videos reveal the presence of several noted hardcore nativists and white nationalists who participated in the 2017 white power rally in Charlottesville, Virginia, that President Donald Trump infamously refused to condemn.

Tarrio does not appear to have been present during the insurrection. Two days before members of the House and Senate gathered to certify the Electoral College results, Washington’s Metropolitan Police Department arrested Tarrio and charged him with possessing high-capacity firearm magazines and destruction of property over the burning of a Black Lives Matter banner last month. A judge barred him from entering the city while he awaits trial.

But it appears that Tarrio’s followers heeded his advice. A journalist working with ProPublica and FRONTLINE encountered members of the Proud Boys in dark clothes walking through Washington on the night before the attack. The four men posed for a photo and confirmed their membership in the group. Few participants involved in the Capitol siege were seen wearing Proud Boys colors or logos.

But since the incident, Proud Boys social media channels have flaunted their direct role in the attack and looting of the Capitol.

One prominent Proud Boys account encouraged rioters as the chaos was unfolding: “Hold your ground!!!… DO NOT GO HOME. WE ARE ON THE CUSP OF SAVING THE CONSTITUTION.”

So far, police have arrested more than 80 people in connection with the attack, including at least one Proud Boy, Nick Ochs. They have seized pipe bombs and Molotov cocktails and arrested at least six people on illegal firearms charges, including one Maryland man who was captured in the visitors’ center of the Capitol. More arrests are expected.

As the crowds ringing the Capitol swelled on Wednesday, a small group of men clad in body armor shuffled toward the doors at the center of the building’s east-facing facade.

This story is part of an ongoing collaboration between ProPublica and FRONTLINE that includes an upcoming documentary. Listen to a FRONTLINE interview with reporter A.C. Thompson.

The eight men, whose movements were captured on video, were identified by ProPublica and FRONTLINE as members of the Oath Keepers, a long-standing militia group that has pledged to ignite a civil war on behalf of Trump. Members of the group joined the protesters and insurrectionists flooding into the Capitol. Footage from later in the day shows Oath Keepers dragging a wounded comrade out of the building.

Stewart Rhodes, a former soldier and Yale law school graduate, who founded the Oath Keepers in 2009 and built it into a nationwide network, was seen on video standing outside the Capitol building. While he was not seen entering the Capitol, he could be seen talking with his militia followers throughout the day. 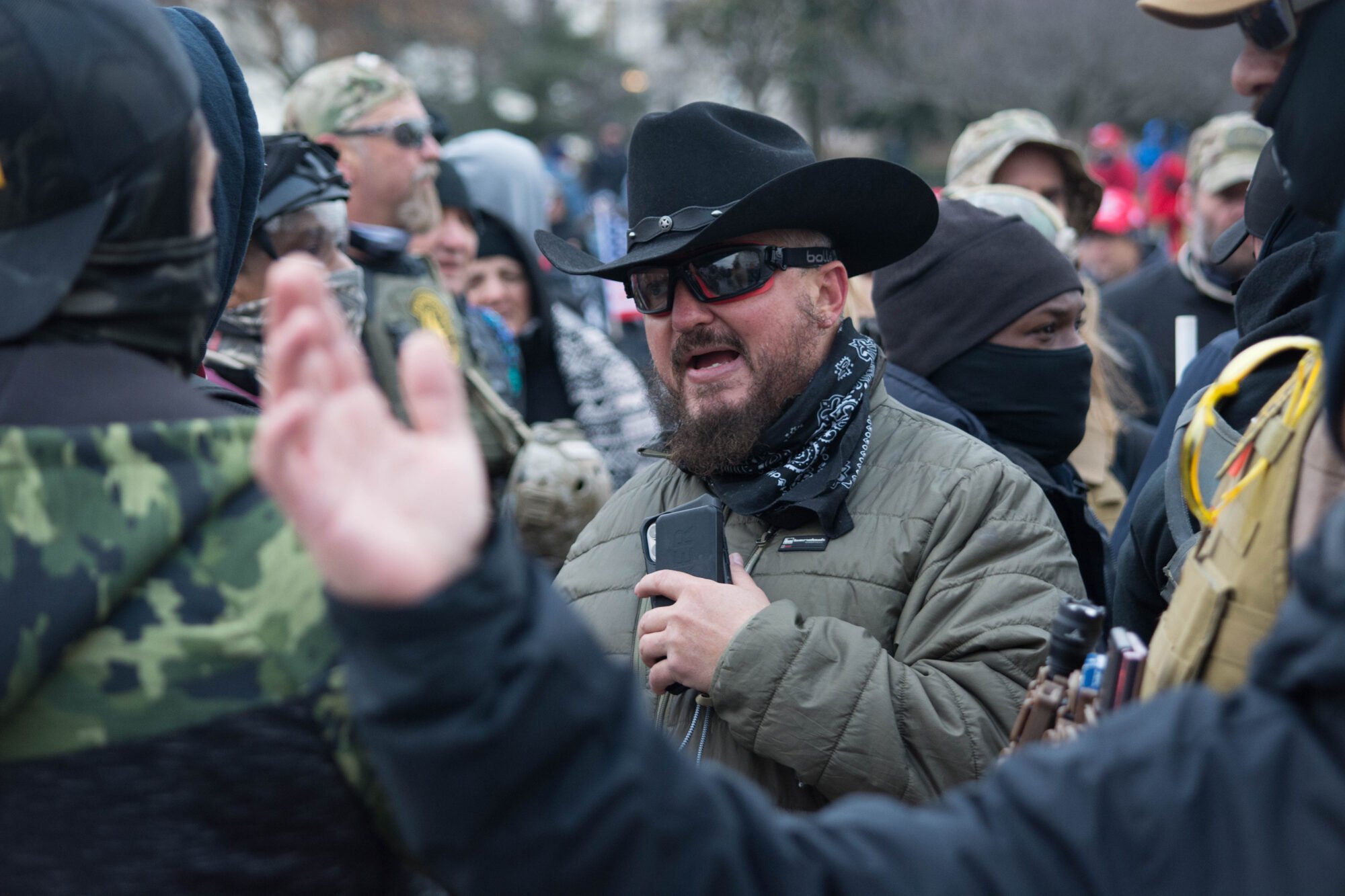 Stewart Rhodes, founder of the Oath Keepers, at the Capitol on Wednesday.
Ford Fischer

Several other of the participants ProPublica and FRONTLINE identified from video have direct links to the white nationalist movement, which has seen a resurgence of activity during the Trump era.

One was Nick Fuentes, an internet personality who streams a daily talk show on DLive, an alternative social media platform. Fuentes, who marched in Charlottesville during the 2017 white power rally there, speaks frequently in anti-Semitic terms and pontificates on the need to protect America’s white heritage from the ongoing shift in the nation’s demographics. He has publicly denied believing in white nationalism but has said that he considers himself a “white majoritarian.”

Fuentes, who spoke at pro-Trump rallies late last year in Michigan and Washington, D.C., said he was at the rally on Wednesday but didn’t follow the mob into the Capitol. One group of Fuentes’ supporters, who call themselves the Groyper Army, was filmed running through the Capitol carrying a large blue flag with the America First logo.

Days before the Capitol was stormed, Fuentes seemed to encourage his followers to kill state legislators in a bid to overturn Biden’s electoral victory, as Megan Squire, a computer science professor at Elon University who follows online extremist communities, noted on Twitter.

“What can you and I do to a state legislator — besides kill him?” he said with a smirk. “We should not do that. I’m not advising that, but I mean, what else can you do, right?”

Squire fears that Fuentes’ incendiary rhetoric will inspire his followers to engage in more drastic — even lethal — acts of political violence. “Instead of trying to appear democratic he’s making an argument for fascism, for monarchism,” she said. “He’s criticizing democracy at every turn. He doesn’t believe in democracy and it’s scary because his fans find him fascinating.”

DLive recently announced that it has booted Fuentes from its platform.

Another figure inside the Capitol with ties to white nationalists was Tim Gionet, a livestreamer who uses the handle Baked Alaska and who participated in the Charlottesville rally, which left one woman dead. Gionet was photographed within the Capitol and apparently used DLive to stream from within the building as events unfolded. Part of his video appeared to show him in Nancy Pelosi’s office, according to the Southern Poverty Law Center, which tracks hate groups.

Other extremist figures present either at the rally or within the Capitol included Vincent James Foxx, an online propagandist for the Rise Above Movement, a now-defunct Southern California white supremacist group.

The militant group members joined with scores of others who rampaged inside the Capitol.

Rep. André Carson, a Democrat from Indiana, said the scene reminded him of a Ku Klux Klan rally. Photos from within the Capitol showed one unidentified man carrying a Confederate battle flag and another wearing a sweatshirt emblazoned with a skull and the words “Camp Auschwitz,” a reference to the infamous Nazi death camp.

Carson and other House members who spoke to ProPublica and FRONTLINE said the body would be launching an extensive investigation of the Capitol Police force and its mishandling of Wednesday’s events.

The rioters, said Carson, who is Black, “were hostile. They were venomous. And I think there was a sense of entitlement that they carried that somehow their country was being taken away from them.”

After the siege, a Boogaloo Bois group called the Last Sons of Liberty, which includes militants from Virginia, posted a video to Parler purporting to document their role in the incident — a clip that shows members inside the Capitol. A loose-knit confederation of anti-government militants, the Boogaloo Bois have been tied to a plot to kidnap Michigan Gov. Gretchen Whitmer and to the murder of two law enforcement officers in California. ProPublica and FRONTLINE have been unable to independently confirm their involvement.

Some far-right activists are already calling for retribution over the death of Ashli Babbitt, a 35-year-old Air Force veteran from California who was shot and killed by a security officer. “We’ve got a girl that’s dead. She’s shot, laying on the ground in there,” said Damon Beckley, leader of a group called DC Under Siege, in an interview just outside the Capitol while the riot was ongoing. “We’re not putting up with this tyrannical rule. … If we gotta come back here and start a revolution and take all these traitors out — which is what should happen — then we will.”

Another person took to Parler to say that they were planning to show up, armed, in Washington for Inauguration Day. “Many of us will return on January 19, 2021 carrying Our weapons,” wrote the Parler user, who goes by the handle Colonel007. “We will come in numbers that no standing army or police agency can match.”

The Proud Boys also celebrated on social media. On Parler, one Proud Boys leader posted a photo of members of Congress cowering in fear and captioned it with a menacing statement: “Today you found out. The power of the people will not be denied.”