A “smoke-generating pyrotechnic device” used at the party sparked the El Dorado Fire in San Bernardino County, Cal Fire said in a

in Yucaipa and spread from the park north on to Yucaipa Ridge, according to the release.

Surveillance video from the party showed a couple with several children walking into the grass at the edge of the El Dorado Ranch Park in Yucaipa. Another person is seen in the video appearing to light the device. Soon after, the family can be seen on video scrambling and grabbing water bottles as the flames grow.

“It really is a tragedy, it’s sad. They were hoping to remember the day in a different way,” said CalFire investigator Capt. Bennet Milloy, adding that over 80% of fires are caused by humans and that people need to be more aware of their surroundings. “You need to be extra cautious because you could be liable.” 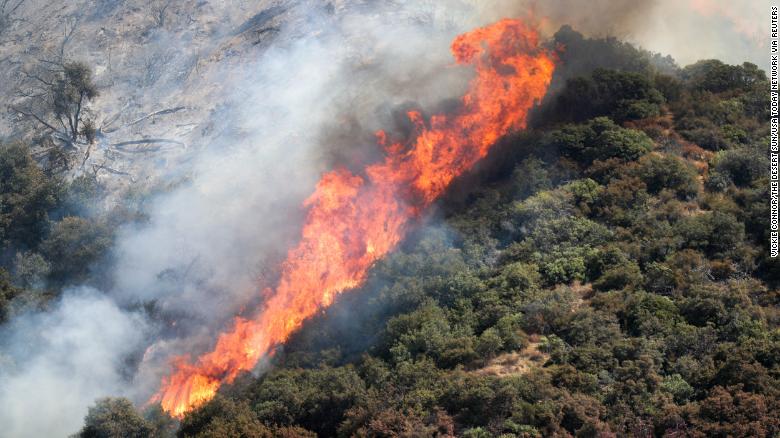 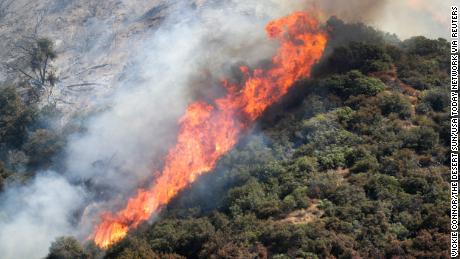 El Dorado Ranch Park is a popular destination for fall photos as the wild grasses turn golden and make a beautiful backdrop, Milloy told CNN. Unfortunately, as the brush dries out, it also makes exceptional tinder for wildfires.

Fire officials have refused to release the video to CNN, citing that it is an ongoing investigation.

Those involved in the gender reveal party, including the person who set off the device, the family and the person taking photos have been cooperating with fire investigators, according to Milloy.

If the district attorney pursues the case, the person who ignited the pyrotechnic would be the person charged, Milloy said.

Currently, fire investigators have identified at least three laws that have been violated, including “igniting the land” and arson. The level of recklessness will determine whether those are filed as misdemeanors or felonies. Based on that, penalties could vary.

A gender reveal party is an Instagram-friendly event held during pregnancy in which the parents “reveal” the baby’s sex to friends and family. That reveal can sometimes take the form of an explosion in the color of blue for a boy or pink for a girl.

The expectant father, an off-duty US Border Patrol agent, had packed the target with the explosive Tannerite and shot it with a high-powered rifle. He pleaded guilty in 2018 to a misdemeanor and was sentenced to five years’ probation and ordered to pay almost $8.2 million in restitution.

Multiple communities evacuated due to fire

Because of the El Dorado Fire, the communities of Oak Glen, Yucaipa Ridge, Mountain Home Village and Forest Falls have been ordered to evacuate. An evacuation warning is in effect for the Yucaipa bench area, and Yucaipa Community Center is being used as a temporary evacuation facility, according to

More than 600 personnel have been deployed to the fire, along with 60 engines, six aircraft and six helicopters, according to the website.

“That place, there’s nothing green out there. It’s a meadow of dry, brown, dead grass,” Patrick Patterson, a resident of the nearby Oak Glen community, told KABC. “Why would you go out there and think that you can light off any kind of firework? Smoke or otherwise. It all has fire.”

The national forest will temporarily close Monday evening “to all public use due to the threat from high fire danger and firefighting resources being spread stretched to the limit,” according to the US Forest Service.

The seven other national forests in Southern and Central California will close to the public this evening, due to the “monumental fire threat,” according to a press release from the Forest Service.