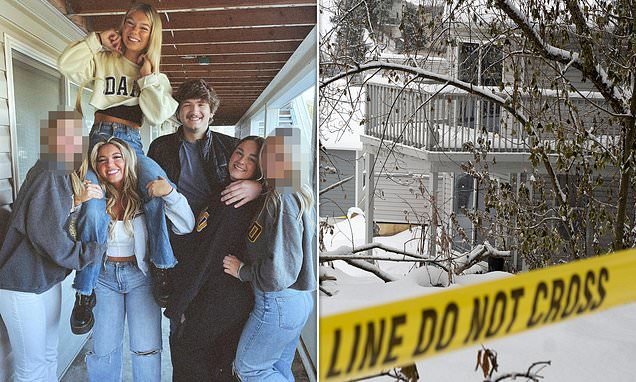 The FBI has increased the number of agents working on the case of the murdered University of Idaho students, after over a month without any suspects or leads.

There are now 60 FBI agents and four members of the Behavioral Analysis Unit (BAU) working on the case which is being led by the local Moscow Police Department. This is up from the previous 46 FBI agents and two BAU analysts.

The Police and FBI will continue to investigate the murder of Kaylee Goncalves, 21, Ethan Chapin, Madison Mogen, 21, and Xana Kernodle, 20, who were stabbed to death in their beds on November 13.

Police also said that some 10,000 tips have so far been made into the deaths of the university housemates, as the unsolved case continues to grip the nation.

Moscow Police Department, along with the FBI, are continuing the ongoing investigation into the death of four Idaho University Students at their home in Idaho

The new FBI recruits into the unsolved case will continue to scour for clues, gather information, and examine footage in the hopes of identifying the murderer.

As well as the 62 FBI agents and the two BAU analysts, some 11 Moscow Police Department detectives and staff, and 28 Idaho State Police officers are working on the case.

The thousands of tips from the public that continue to flood in will hopefully assist the police in solving the murders.

Moscow Police Department Chief James Fry said on Monday: ‘We have had right around 10,000 tips come in. We’re reviewing all those tips. We’re checking to ensure we have individuals to look at all of those tips, and any piece of evidence they can link to this case, they’re doing so.’

Specially trained investigators will now examine the tips and video submissions to piece any leads together.

The brutal quadruple homicide took place 37 days ago now, but a lack of developments in the case has frustrated the victims’ families, Moscow locals, and the nation who want to see the found and brought to justice.

The murders took place the group’s off-campus university residence in the early hours of Sunday morning on November 13.

The night before, on the evening of Saturday, November 12, Miss Mogen and Miss Goncalves had been at a local bar in Moscow, Idaho. Chapin and Kernodle had been at a party at the Sigma Chi fraternity house on the University of Idaho campus.

Both parties returned home in the early hours of the morning. Chapin was not a permanent resident of the house but was staying with girlfriend Xana Kernodle.

The bodies of the four college students were later found on the second and third floors of the house.

The bodies of Kaylee Goncalves and Madison Mogan were found on the top floor of the house. Ethan Chapin and Xana Kernodle were found in a second-floor bedroom. Survivors Dylan Mortensen and Bethany Funke were sleeping on the first floor

After a night out, the four housemates were murdered around 3-4am on the morning of November 13

The cops investigating the unsolved murder case have come under severe criticism after producing a lack of significant leads or any suspects 37 days after the students were slaughtered in their beds.

The lawyer representing the family of Kaylee Goncalves has asked whether the local police are capable of solving the quadruple homicide.

Speaking to the Today Show yesterday, Shannon Gray said Kaylee Goncalves’ family is extremely frustrated with law enforcement’s lack of answers more than one month after the murders.

This has led the Goncalves family to hire their own private investigator to get some answers.

‘We want to let them know that we were holding them accountable for their decisions,’ Gray said.  ‘And if they are in over their heads, then acknowledge that and turn the investigation over to someone who is more versed in handling these types of matters.’

‘I’m not sure they’re capable of handling a quadruple murder,’ he added.

Idaho police are currently searching for information regarding a white Hyundai Elantra that was in the ‘immediate area’ of the Moscow home where four students were found dead.

Police are currently searching for information regarding a white Hyundai Elantra found. A car was in the ‘immediate area’ of the Moscow home where four students were found dead

Idaho police travelled up to 24 miles out of Moscow to collect surveillance footage in nearby towns after the white Hyundai was spotted near the scene. They are still locating the car

The officers are searching through a database of some 22,000 registered white Hyundai Elantras that fit the description of the one found at the scene.

The car was found near King Road in the ‘early morning hours’ of November 13, the same morning the students were found dead inside their off-campus home.

Police have said in the past that they driver ‘may have seen something’ that could be relevant to the fatal stabbings.

There are now ‘multiple groups’ scanning through clips as they try to track down those responsible, Fry said as he vowed his force would continue working over Christmas.

A possible new development may be a possible scream that was picked up on a police officer’s bodycam on the night of the brutal murders.

A high-pitched sound, recorded at 3:12am, was captured by a Moscow police officer who was responding to an unrelated incident near the University of Idaho.

Some web-sleuths believe that the sound is a scream, while others think it could be the sound of car tyres peeling away.

The noise appears to have been made around the time the students were killed and authorities hope it may help them in determining what happened.

Police have found no evidence of a sex crime, and the victims had wounds on their bodies which indicated that they tried to fight of the attacker.

Initially cops said they thought all four were assaulted as they slept, with Goncalves father saying she had the worst injuries from the incident – suffering ‘gouging wounds’ and ‘rips’.

The Chief of police at Moscow Police Department himself admitted that investigators did not understand how the two surviving roommates – Bethany Funke and Dylan Mortensen – appeared to sleep through the attack.

Police and the FBI agents will now continue to work over Christmas to find the killer.

Investigating authorities are asking the public to call in tips at 208-883-7180, or email tipline@ci.moscow.id.us.