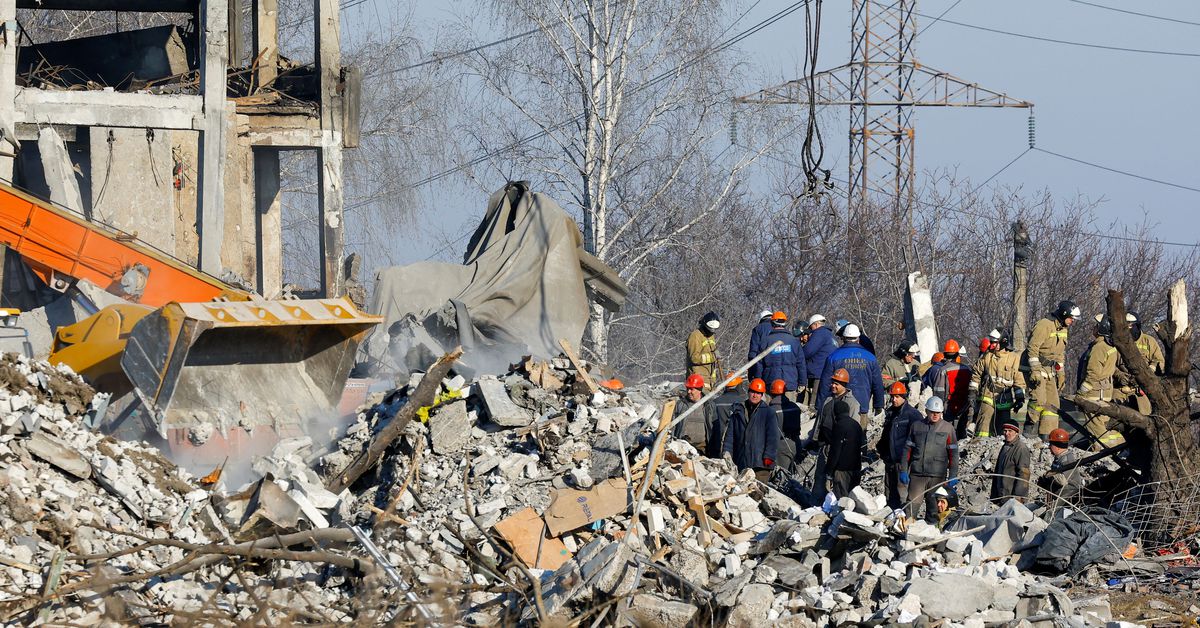 MOSCOW, Jan 3 (Reuters) – Russian nationalists and some lawmakers have demanded punishment for commanders they accused of ignoring dangers as anger grew over the killing of dozens of Russian soldiers in one of the deadliest strikes of the Ukraine conflict.

In a rare disclosure, Russia’s defence ministry said 63 soldiers were killed on New Year’s Eve in a fiery blast that destroyed a temporary barracks in a vocational college in Makiivka, twin city of the Russian-occupied regional capital of Donetsk in eastern Ukraine.

Russian critics said the soldiers were being housed alongside an ammunition dump at the site, which the Russian defence ministry said was hit by four rockets fired from U.S.-made HIMARS launchers.

Ukraine and some Russian nationalist bloggers have put the Makiivka death toll in the hundreds, though pro-Russian officials say those estimates are exaggerated.

Rallies to commemorate the dead were held in several Russian cities, including Samara, where some came from, RIA Novosti news gency reported. Mourners laid flowers in the centre of Samara.

“I haven’t slept for three days, Samara hasn’t slept. We are constantly in touch with the wives of our guys. It’s very hard and scary. But we can’t be broken. Grief unites … We will not forgive, and, definitely, victory will be ours,” RIA quoted Yekaterina Kolotovkina, a representative of a women’s council at an army unit, as telling one of the rallies.

The strike on Makiivka came as Russia was launching what have become nightly waves of drone attacks on Kyiv and other Ukrainian cities. Ukrainian President Volodymyr Zelenskiy said in his nightly video address that the attacks were aimed at “exhausting our people, our anti-aircraft defences, our energy”.

Ukrainian officials said Russia had on Monday struck Ukraine-controlled parts of the Donetsk region, hitting the village of Yakovlivka, the city of Kramatorsk and destroying an ice rink in the town of Druzhkivka.

The governor of Ukraine’s Luhansk region, which along with neighbouring Donetsk forms the industrial Donbas claimed by Moscow, said on Tuesday Ukrainian forces had made steady advances in the direction of Russian-held Svatove and Kreminna.

“(Russian forces) are used to having a complete advantage in both artillery and shells. Now we have reached parity and our artillerymen are shooting better, hitting more ammunition depots and barracks, while firing far fewer shots,” Governor Serhiy Haidai told Ukrainian television.

Elsewhere, Ukraine’s military General Staff said a Dec. 31 strike on a Russian-held area of the southern Kherson region had killed or injured some 500 Russian troops.

Reuters could not independently confirm the battlefield accounts.

Ukraine’s presidential administration said three people had been killed and 10 wounded in Russian strikes over the past 24 hours, two of them in Kherson region and one in Donetsk region.

The governor of Donetsk, Pavlo Kyrylenko, said in a Tuesday morning update for his region that Russian forces had attacked Ukrainian positions overnight along the front line.

[1/14] Workers and emergencies’ ministry members remove debris of a destroyed building purported to be a vocational college used as temporary accommodation for Russian soldiers, 63 of whom were killed in a Ukrainian missile strike as stated the previous day by Russia’s Defence Ministry, in the course of Russia-Ukraine conflict in Makiivka (Makeyevka), Russian-controlled Ukraine, January 3, 2023. REUTERS/Alexander Ermochenko

“Whenever you dig up a boy, you live through his nightmare and the horror he went through in his last moment, when he understood that this is the end,” said volunteer Oleksii Iukov, 37. “This is very, very difficult because you understand that you’re about to tell his family that their close one is gone.”

Russian military bloggers said the extent of the destruction at Makiivka was a result of storing ammunition in the same building as a barracks, despite commanders knowing it was within range of Ukrainian rockets.

Igor Girkin, a former commander of pro-Russian troops in eastern Ukraine who is now one of the highest-profile Russian nationalist military bloggers, said hundreds had been killed or wounded. Military equipment stored at the site was uncamouflaged, he said.

“What happened in Makiivka is horrible,” wrote Archangel Spetznaz Z, a Russian military blogger with more than 700,000 followers on the Telegram messaging app.

“Who came up with the idea to place personnel in large numbers in one building, where even a fool understands that even if they hit with artillery, there will be many wounded or dead?” he wrote. Commanders “couldn’t care less”, he said.

Ukraine almost never publicly claims responsibility for attacks on Russian-controlled territory in Ukraine and Zelenskiy did not address the Makiivka strike in his nightly speech on Monday.

The fury in Russia extended to lawmakers.

Grigory Karasin, a member of the Russian Senate and former deputy foreign minister, not only demanded vengeance against Ukraine and its NATO supporters but also “an exacting internal analysis”.

Sergei Mironov, a legislator and former chairman of the Senate, Russia’s upper house, demanded criminal liability for the officials who had “allowed the concentration of military personnel in an unprotected building” and “all the higher authorities who did not provide the proper level of security”.

Unverified footage posted online of the aftermath of the blast at the Russian barracks in Makiivka showed a huge building reduced to smoking rubble.

Having suffered defeats on the battlefield in the second half of 2022, Russia resorted to mass air strikes against Ukrainian cities.

Ukraine said on Monday it had shot down all 39 drones Russia had launched in a third night of air strikes on civilian targets in Kyiv and other cities.

Ukrainian officials said their success proved that Russia’s tactic in recent months of raining down missiles and drones to knock out Ukraine’s energy infrastructure was increasingly failing as Kyiv beefs up its air defences.

Russia denies targeting civilians in what it calls a “special military operation” against its southern neighbour launched on Feb. 24.

Additional reporting by Pavel Polityuk in Kyiv and by other Reuters bureaux; Writing by Michael Perry and Gareth Jones; Editing by Robert Birsel and Nick Macfie