ProPublica Illinois is a nonprofit newsroom that investigates abuses of power. Sign up to get weekly updates about our work.

“Certainly Kim Foxx’s policies of not prosecuting, of dismissing cases, of dismissing all narcotics charges, of letting people who loot out on I-bonds to return to the looting — it is a dog whistle for these criminals to do exactly what they did last night,” said O’Brien, a Republican who’s challenging Foxx for Cook County state’s attorney on the November ballot. “We are going to become Detroit if we don’t fight Kim Foxx.”

Most of O’Brien’s claims were simply untrue; for starters, judges, not prosecutors, ultimately decide whether suspects can post bond and go free before trial. But he touched on the very real concerns of many Chicagoans who believe crime is out of control and officials like Foxx aren’t doing enough about it.

Get stories about big issues that affect people living and working in the state of Illinois delivered straight to your inbox.

Foxx’s election four years ago, with backing from national reform groups, powerful local politicians and some Black Lives Matter activists, was viewed across the country as a pivotal event. She promised to restore trust and fairness to the state’s attorney’s office — a step toward making the criminal justice system more just.

Since the police killing of George Floyd in Minneapolis, the demands for change have intensified as part of a national conversation about racism and law enforcement.

But after months of protests, occasional explosions of rioting and a surge in violence in Chicago, a number of politicians have declared that it’s time to get tougher on crime. The loudest is, of course, President Donald Trump, stoking fears of chaos and destruction as he campaigns for reelection on “law and order.” Challenger Joe Biden and other Democrats have noted that the unrest and violence are occurring on Trump’s watch, but that doesn’t mean they’re not worried that the political backlash is real.

In a history-turning year, some in Chicago are wondering about the previously unthinkable: Could a Republican actually win countywide office?

More important, the growing fear of crime ensures that not just Foxx but the reform agenda she promised will be up for a vote. In a time of turmoil and anxiety, how many Democratic voters will respond to the call for law and order? Is justice more than locking people up?

The optics are also telling: Foxx, who grew up in the Cabrini-Green public housing development, is the first African American in decades to serve as top prosecutor, and the first African American woman ever. While she’s been embraced by voters in neighborhoods most affected by crime and policing, she’s been vilified in communities where most of the city’s police officers live. O’Brien has to hope he can connect with voters in mostly white and Hispanic areas in the rest of Cook County.

Foxx’s predecessor, Anita Alvarez, was a career prosecutor. Asked to describe her mission, she said: “We stick up for victims of crime.”

That is a worthy goal, but Alvarez talked far less about justice. A product of the tough-on-crime era of the 1980s and 1990s, she was slow to respond to a stunning series of false confessions and wrongful convictions. She was also widely seen as too friendly with police, and too dependent on them to build her cases, to hold them accountable when needed.

In 2015, a judge ordered the release of video showing Chicago police officer Jason Van Dyke shooting 17-year-old Laquan McDonald 16 times the previous year. Alvarez charged Van Dyke with murder — but not until hours before the video was made public, more than a year after the shooting.

Four months later, Foxx beat Alvarez decisively in the Democratic primary. She was part of a small wave of reform-minded prosecutors around the country promising to bring new transparency and fairness to the work.

Foxx has followed through on many of her promises, such as reinvigorating her office’s conviction integrity unit and creating a data portal that allows the public to track every case the office handles. She also has taken a new approach to some nonviolent offenses that she said would not only be more humane, but would free resources for fighting violent crimes.

For instance, people arrested for shoplifting — charged formally with retail theft — now face misdemeanor charges unless they’re accused of stealing at least $1,000 of goods. The move was welcomed by reform groups as well as officials at the jail, where homeless or mentally ill shoplifters often ended up when they couldn’t afford bail. But it was blasted by some business and political leaders.

Her reforms, including calls for police accountability, have also made her deeply unpopular with officers, including the local leadership of the Fraternal Order of Police.

Several clear mistakes have given more fire to her critics. Exhibit A is the fiasco with actor Jussie Smollett. Arrested for allegedly staging a hate crime against himself in January 2019, Smollett avoided prosecution or even making an admission of wrongdoing when Foxx’s office dropped the charges. Foxx has yet to fully explain the series of events, which has only fed the media frenzy around the case. Last month, a special prosecutor cleared Foxx’s office of criminal wrongdoing but said it had committed “substantial abuses of discretion.”

“We certainly recognize that the public had a deep interest in the case and we had an obligation to be fully transparent with them and we didn’t handle that well. I own that,” Foxx told me in an interview this week. “But that still means we have to do the work that I was put here to do.” 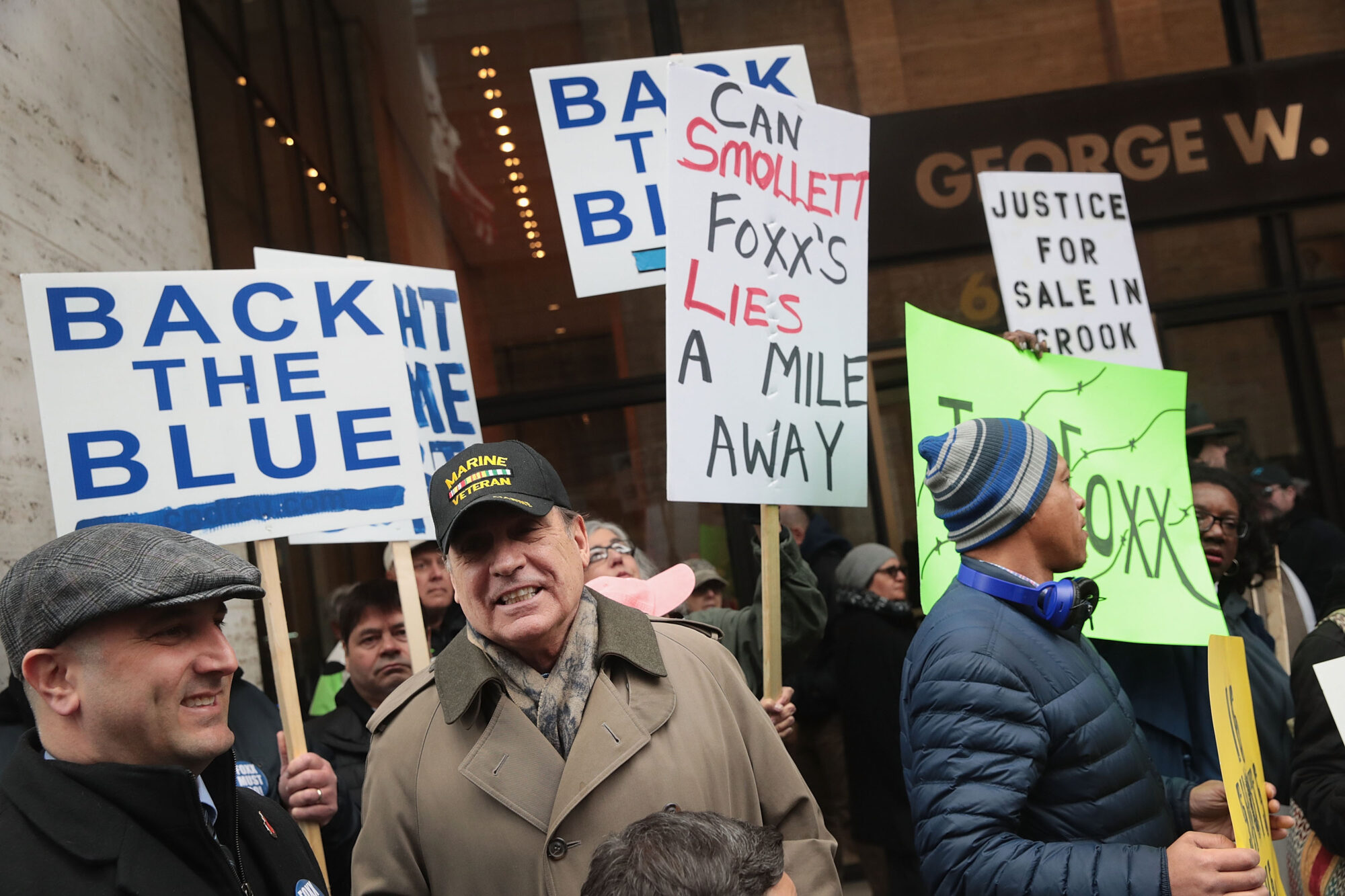 Chicago’s police union, which views Foxx as anti-cop, organized a protest in April calling for her removal from office.
Scott Olson/Getty Images

In March, Foxx faced three primary challengers who attacked her handling of the Smollett case and questioned whether her office had let too many criminals off the hook. Though Foxx was formally endorsed by the Cook County Democratic Party, several elected officials from mostly white areas declined to back her.

State Sen. Robert Martwick, the 38th Ward Democratic committeeperson, said members of his ward organization voted not to endorse anyone in the race.

Martwick said he respected Foxx for working with state legislators to enact criminal justice reforms. “The 1980s lock-em-up-and-throw-away-the-key approach, she’s partnered with the legislature to change some of those policies,” he said.

But in the 38th Ward, on the Northwest Side, “either a police officer is a member of your family or your neighbor or your kids’ coach in little league baseball. And among those police officers, there’s a lot of concern that she’s making their lives more difficult. Whether it’s right or wrong, that is the perception.”

Foxx lost the 38th Ward as well as many other majority-white city wards and suburban townships. But her huge margins in Black areas sent her to victory with 50.2% of the vote.

Given the Democratic dominance of Cook County, Foxx was expected to have little trouble with O’Brien in November; only two Republicans have served as state’s attorney in the last 60 years. But the tenor of the race changed after the unrest following Floyd’s killing in May.

A few weeks later, Foxx announced that her office would not prosecute protesters arrested for nonviolent offenses such as curfew violations. Progressives praised the move for backing the right to demonstrate peacefully. Others saw it as another sign that Foxx didn’t have the backs of the police.

On the night of Aug. 9, businesses in downtown Chicago and the Near North Side were struck by looters in an ugly repeat of the chaos in the spring.

The next morning, Mayor Lori Lightfoot suggested that criminals were emboldened because Foxx and her office weren’t doing their jobs to keep them in jail. Lightfoot, a Democrat, had supported Foxx, and the two later appeared at a press conference declaring they were working together with other public safety officials. But the narrative was set. Downtown Alderman Brendan Reilly blasted Foxx in an email newsletter to constituents, and other Democrats signaled they would not back her reelection.

O’Brien joined in the attacks. Like many others, he mixed criticism with outright falsehoods.

When I spoke with him this week, he argued that it was fair to link Foxx to the looting. He said that, as he understood it, prosecutors in her office didn’t fight judges who let accused looters out on bond before trial. But that’s not what he had said after the unrest, when he claimed she had let them out herself. O’Brien also admitted he had no evidence that looters had been released on bond and then gone back to looting, but insisted that criminals “have an understanding that the state’s attorney isn’t serious” about enforcing the law.

When he looked closely at Foxx’s record, he said, “it seemed that there was a real bias — she favored defendants over victims.”

On Aug. 13, Foxx’s office announced that prosecutors had approved charges against 42 of the 43 people police had arrested for felonies during the looting.

Still, O’Brien has enjoyed a boost in funding and attention since the second round of unrest. From Aug. 10 through Sept. 3, Foxx’s campaign reported six donations adding up to $19,900, mostly from wealthy longtime supporters. O’Brien, meanwhile, received 42 contributions adding up to $199,000. His biggest check, for $57,800, came from the police union. Other police backers have also donated, including lawyers who have defended officers accused of misconduct, former top aides to Alvarez, and former judge Matthew Coghlan, who had a record of handing out harsh sentences before voters decided in 2018 that he shouldn’t be retained.

Foxx said the accusations from O’Brien and others that she has helped create a “revolving door” of criminals going in and out of jail is not supported by evidence. She noted that from 2017 through early this year, crime, including violent offenses, dropped even as her office was implementing reforms.

The notion that the state’s attorney’s office can’t simultaneously pursue public safety and a broader sense of justice is false, she said, and it would be a mistake to stop the reform efforts now.

“All of those bad justice policies came out of fear, and we know it: three strikes laws, mandatory minimums, the war on drugs,” Foxx said. “That’s the extreme irony. We know how we got here.”

O’Brien himself served as a prosecutor in a case that ended up putting four men in prison for a 1986 rape and murder they were later cleared of through DNA evidence. “In this case the justice system failed those four men and I was part of the failure,” he said. If elected, O’Brien said, he would commit to more vigorous testing of crime scene evidence.

A key witness in that case offered testimony that experts concluded was false. But O’Brien said the case was not a sign of overzealous policing or prosecution. As state’s attorney, he said, he would “keep the community safe and stick up for victims.”