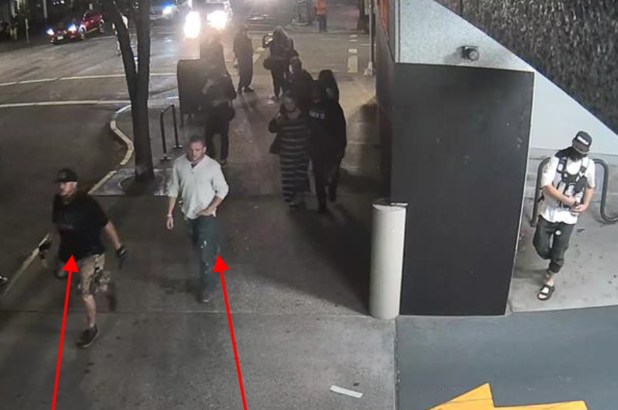 The self-described antifa member who shot a Trump supporter in Portland last Saturday appears to have targeted his victim, new images show.

The pictures, from a surveillance video released by Multnomah County District Attorney Mike Schmidt, show Michael Forest Reinoehl ducking into the alcove of a parking garage, then emerging to follow two counterprotesters who had just walked by, while reaching for his waistband.

A short time later, two gunshots were fired, one that hit the victim’s bear spray can and the other that proved fatal, The Oregonian reported. The footage, pieced together with photos from other surveillance cameras and witness videos, includes a scene where Reinoehl is seen with his right arm extended as a cloud of bear spray erupts near the victim, Aaron “Jay” Danielson.

Police found a single Winchester .380-caliber bullet casing on the street, a metal canister of bear spray that was hit with a bullet and a collapsible metal baton near Danielson’s body, according to documents from the DA’s office made public Friday. Danielson had been spraying the bear mace in the moments before he was shot, witnesses told cops, according to the Daily Mail.

Danielson, 39, was pronounced dead at 8:55 p.m. last Saturday on Southwest Third Avenue, about 10 minutes after the shooting was reported. He died from a single bullet to the upper right chest, an autopsy found. The bullet was found lodged in his back. A friend who was with him claimed they were “hunted down” and that the shooting was a “planned execution.”

Michael Reinoehl arriving at the garage.

Reinoehl was shot multiple times by Washington State officers outside an apartment in Lacey, Washington, a town about two hours north of Portland. A witness who was driving to the small apartment complex that Reinoehl was leaving said she saw him open fire from a car and that the officers returned fire. Reinoehl died at the scene. He had a handgun but Washington investigators said it’s not clear yet whether he fired it.

Signed in as Michael_Novakhov

Send this story to NewsBlur

Shared stories are on their way…