Anyone trying to find the edges of the U.S. Overton Window right now must feel like they’re tracing an amateur rendition of an early Picasso. After a summer spent chanting “defund the police,” self-identifying progressives applaud the pouring of some 25,000 troops and busloads of out-of-city law enforcement into the streets of Washington, DC. Those eager to cheer the departure of a racist, sexist, war-hawking elitist from the White House were quick to welcome a new racist, sexist, war-hawking elitist. Those who lambasted Trump for dragging more swamp creatures into the swamp rather than draining it are applauding Biden for his diverse cabinet appointments, ignoring the revolving door of corruption and oppression they represent. Those who (correctly) decried the Paris Climate Agreement for being flimsy and non-committal are celebrating Biden’s executive order to rejoin it.

Indeed, anyone applauding Biden’s first flicks of the wrist as President would do well to look beyond the window dressing. Of the 15 new executive orders that aren’t merely a light Trump-eraser, they herald the return of the classic Democratic practice of sprinkling progressive-tasting garnish around deep systemic problems. For example, Biden’s executive order to once again kill the Keystone XL pipeline project, a project that Obama had already killed (that Trump then revived) is at best a step sideways, not forwards. Biden has said outright that he has no interest in a Green New Deal, despite the fact that the watered-down version that bounced around Congress left gaping holes in truly addressing climate chaos. He has also ignored repeated calls to kill both Line 3 and the ill-fated Dakota Access Pipeline.

Meanwhile, the executive order to “advance racial equity” in the federal government grinds sharply against Biden and Harris’ own political histories while, much like Pelosi’s toothless Climate Crisis committee, it offers up no real action to address the issue at hand.

The same is true of Biden’s call to defend DACA, the Obama-era legislation that granted a renewable two-year stay-of-deportation for children who immigrated to the U.S. with their parents. As DACA recipient Ella Mendoza explained to me back in 2017, “DACA was flawed from the very beginning.” Mendoza described a carrot and stick program that demanded recipients sign admissions of illegal border crossings for momentary reprieves that could be overturned at any time. The convenient announcement of DACA around Obama’s re-election just highlighted for Mendoza that this was really about dismissing “Obama’s deportation of more than 2 million people” just in time for election day. “You can tell me it’s about children all you want, but you’re deporting our parents,” she said. In short, DACA wasn’t a dream come true. While people like Mendoza struggled to build a life under the gaze of the deporter-in-chief, Obama was only too glad to throw other children in cages, a practice many only found abhorrent when Trump did it years later. DACA isn’t comprehensive immigration reform – it never was. Establishment Democrats and their fans cooing over it like the return of a lost child doesn’t change that fact.

Looking ahead, many might feel a sense of relief that Biden at least takes the COVID-19 pandemic seriously, signing executive orders to mandate masks in federal buildings, to rejoin the World Health Organization and to address the financial free-fall impacting millions of Americans. However, if you look closely, you’ll see again that unfulfilling Democratic garnish sprinkled on deep systemic rot. The executive order to extend the CDC’s eviction and foreclosure moratorium until March 31 doesn’t address the loopholes in the original order that still allow for evictions. Furthermore, the moratorium does not cancel rent. Tenants will still be liable to pay for all missed payments once the moratorium ends, and landlords are still allowed to hike the rent during the unpaid months.

Likewise, the “pause” on student loan payments demonstrates yet again how little the Democrats are willing to help the people. The move carries over a pause which the Trump administration started while “asserting” that Biden will carry through on his campaign pledge to cancel $10,000 of student loans per borrower, noting however that it will take time as the cancellation has to go through Congress first. Great! So we’ve got a Trump leftover plus an empty promise to shave off $10k in student loans when the average debt sits at $32,731, and that’s not including accrued interest. Biden’s executive order is essentially a Post-It note ‘IOU’ with a smiley face scribbled on the back. It kicks the can over to Congress in the hopes we won’t realize that Biden could actually cancel all $1.7 trillion in student debt with a different (read: actually useful) executive order. He’s probably also hoping we’ll forget that back in 2005, Biden was one of 18 Democrats who voted excitedly for a bill that stripped student loan borrowers of bankruptcy protections, leading to a tripling in student loan debt over the next ten years. Oddly enough, Biden never voted to say, strip multi-million dollar corporations of their bankruptcy protections. If you’re a huge corporation, you can easily wriggle out of your debts to workers, communities and local governments. If you’re a destitute student, there’s no way out of your debt. Still, Biden could do it – he could lift the burden of an indebted future from millions, a move that even the likes of Business Insider agree would bolster the economy and in particular benefit communities of color and low-income households. Gee, sounds like that’d be a win-win in your quest to “advance racial equity” there Joe.

Of course, the fact of the matter is that Biden, the master-mind of the ’94 crime bill, has no interest in advancing racial equity. He’s never cared about the plight of people drowning in debt – or drowning in rising floodwaters – and he doesn’t care now. He has no intention of progressing or changing the direction of his political career. Indeed, he quite glibly announced to rich donors back in 2019 that “nothing will fundamentally change” when he takes the Oval Office. Based on his cabinet picks and his first orders as President, I think we should take him at his word.

The relief that Trump is gone is understandable. But don’t be lulled by the very conditions that gave rise to Trump’s presidency in the first place. To celebrate our so-called return to a democracy we’ve never had with a decency that is at best shallow, and at worst a conniving cover-up for crimes against humanity speaks of a belief in American exceptionalism that is neither warranted nor helpful. Underneath the progressive platitudes and unfulfilling garnish lie the same systemic rot, a rot that was perhaps most noticeable on Inauguration Day itself – when two worlds stood sharply demarcated by militarized checkpoints, and the revolving door of red and blue capitalist imperialism was almost literally visible.

Walking around DC on Inauguration Day, I felt like I was touring a vast military exhibition – which basically, I was. Military vehicles rolled down quiet neighborhood streets as if they’d gotten lost on their way to the frontlines. National Guardsmen with giant rifles and camo gear stood out like militantly sore thumbs against the backdrop of a local park. Operation Peaceful Transition (as I’ve come to call it) was in full swing, with all the irony of previous imperialist missions like Operation Iraqi Freedom. In the shadows of Biden and Harris’ gleeful photo-ops with the likes of George W. Bush, community members across DC were working tirelessly to address the effects of a city shut down, blocked off, and singularly concerned with providing the ruling class with a cushy Inauguration Day. 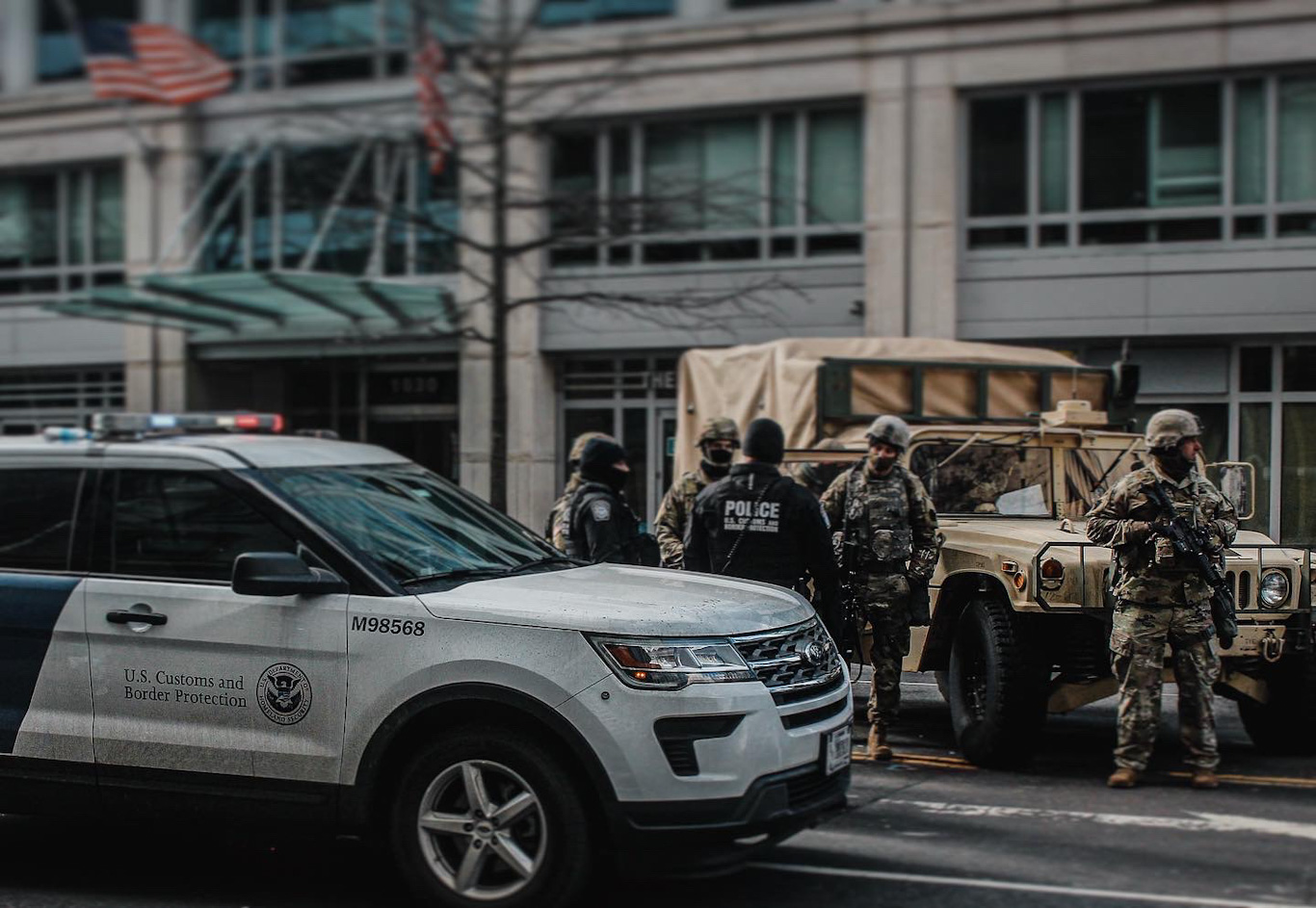 Indeed, despite DC serving as the stage for this tragicomedy of political theater, a lot of locals weren’t focused on Joe Biden. Community members were busy raising funds and pooling resources for neighbors who were scared to leave their homes or go to work, fearing both fascist violence and the scourge of freshly deployed ICE and CBP officials (two sides of the same coin). Others were delivering groceries or hot meals to people who were understandably creeped out by the massive military and police presence in the city. Mutual aid groups set up 24-hour rolling shifts to address emergency requests and to share information about everything from checkpoints (potentially life-changing information depending on your immigration status) to local POC-owned restaurants to order food from.

Meanwhile, Biden stood at perhaps the most protected podium in the world, speaking of hope, unity, leadership, peace, and a brighter future. These are two worlds disconnected. We the people are literally barred from his world, and he has no interest in entering ours.

The revolving door of imperialist capitalist preservation turns again. But there is nothing peaceful about it. And the hope that flows from the twisted tongues of our politicians is not hope for the people. Still, that doesn’t mean that there is no hope. Indeed, quite the opposite. Our hope lies in recognizing and manifesting our power – in realizing that projects like KXL would never even have been canceled in the first place were it not for people’s collective, tireless and targeted actions.

Our hope lies in the roots – in these communities that bustle and build in the shadows of empire. It lies in the crowns of trees where tree-sitters block the way of pipelines. It lies in solidarity – in growing everything from garlic in community gardens to growing networks of interconnected local aid groups. It lies in direct action. As Direct Action & Climate Justice Organizer Alex Cohen notes, “Direct Action builds the new and stops the old. Direct Action brings hope in the darkest times. Direct Action builds community, creates assembly, fuels worth and empowerment, and builds people power. No matter how grave the time, it remains a tool available to us 24/7 and 365 days a year, on our own terms.”

It is this hope and these tactics that we must take into the Biden presidency – into every presidency.  Instead of gazing at the spires of empire through the Overton Window, fogged by false promises and twisted by hypocrisy, look closer to home. Don’t look up for liberation, look next door, down the street. These aren’t progressive platitudes but quite literally how we survive – how we fight, how we build – on our own terms in these grave times.

Eleanor Goldfield is a creative radical, journalist, and filmmaker. Her work focuses on radical and censored issues via photo, video, and written journalism, as well as artistic mediums including music, poetry, and visual art. She is the host of the podcast, Act Out, co-host of the podcast Common Censored along with Lee Camp, and co-host of the podcast Silver Threads along with Carla Bergman. Her award-winning documentary film, “Hard Road Of Hope” is about West Virginia as both resource colony and radical inspiration. She also assists in frontline action organizing and training. See more of Elanor’s work @ ArtKillingApathy.com | HardRoadofHope.com

The post Despite What You Heard, There Was No Peaceful Transition appeared first on MintPress News.