Over the last few months, Israeli courts upheld the eviction orders of 16 Palestinian families in the East Jerusalem districts of Silwan and Sheikh Jarrah. The evictions are carried out through lawsuits by Israeli company Nachalat Shimon and settler associations Ateret Cohanim and Elad. These three organizations argue the land the families’ homes are on belongs to them because Yemeni Jews owned the land before 1948. Israel’s discriminatory Legal and Administrative Matters Law allows Jews to claim ownership of property they lost during the 1948 War but doesn’t guarantee that same right to Palestinians.

Nachalat Shimon operates in Sheikh Jarrah and is responsible for the evictions of 11 Palestinian families in the neighborhood since 2008. Ateret Cohanim and Elad work to displace Palestinian residents in Silwan and have evicted 14 families in the area since 2015. Silwan is part of Jerusalem’s “Holy Basin,” an area coveted by Jewish settlers because of its proximity to the Old City and purported connections to King David. While 16 families are under threat of imminent eviction, the UN’s Office for the Coordination of Humanitarian Affairs estimates that over 800 Palestinians are at risk of forced eviction, chiefly as a result of Israeli settlers. 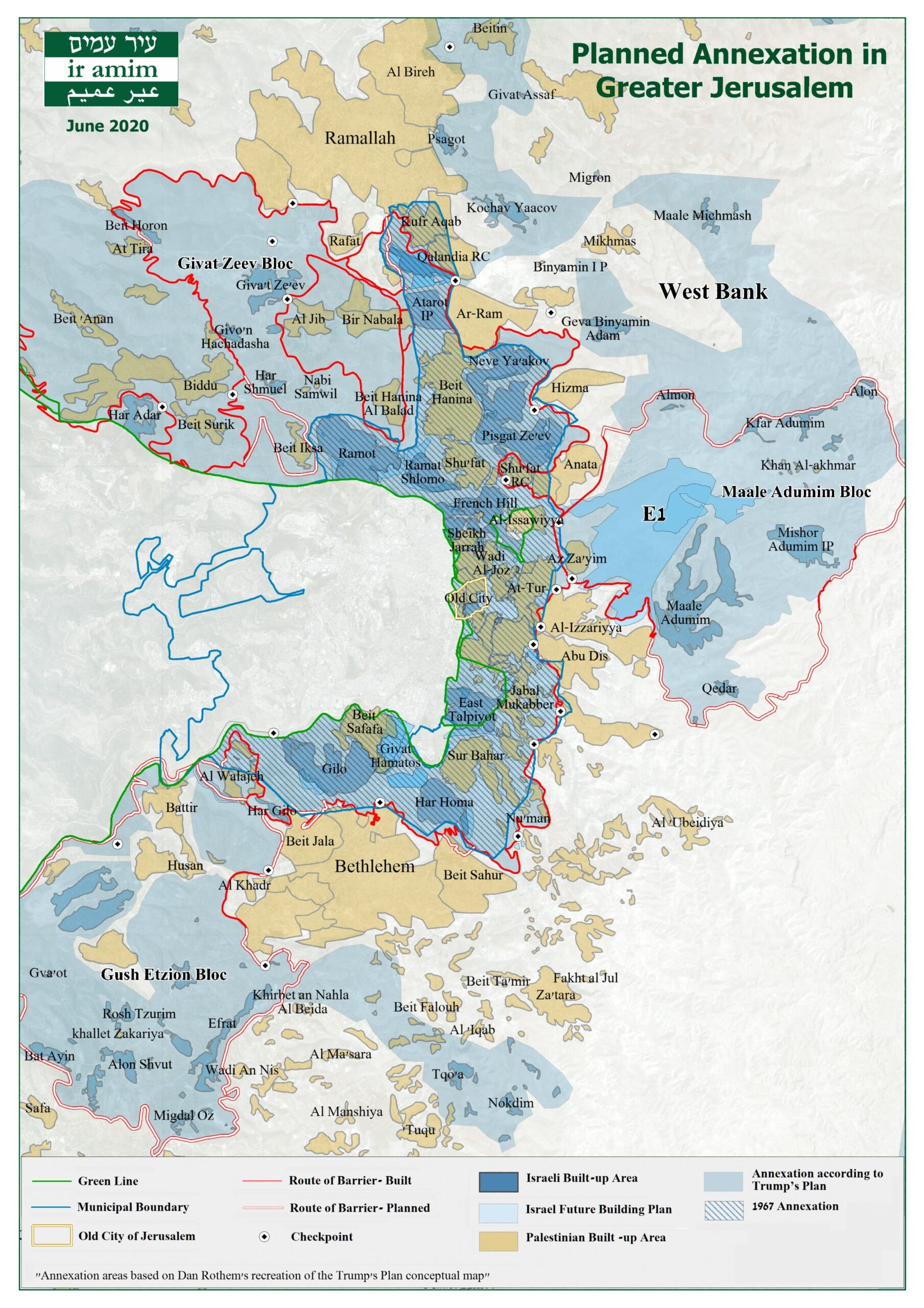 The planned annexation of Greater Jerusalem. Areas in blue are, or soon will be, under Israeli control. Credit | Ir Amim

Public information is limited on where exactly these entities receive their donations from. According to the Israeli settlement watchdog group, Peace Now, Elad has not disclosed a donor list to Israel’s Registrar of Associations since 2005. However, it’s well-documented that Ateret Cohanim receives money from its sister nonprofit American Friends of Ateret Cohanim and Elad receives funds from its American wing, Friends of Ir David.

American money behind the settlements

The United States’ Internal Revenue Service doesn’t require nonprofits to disclose their donors, allowing American Friends of Ateret Cohanim and Friends of Ir David haven’t to avoid publishing this information in their tax filings. Despite this, Friends of Ir David reported providing grants of $20 million to organizations in the Middle East in 2018. On its tax forms, the group writes its stated purpose is “to provide assistance to organizations in the Old City of Jerusalem and the Ancient City of David.”

Elad is currently working with the Israel Antiquities Authority to excavate a nearly 300-foot-long tunnel under the Wadi Hilweh neighborhood of Silwan in hopes of unearthing the First and Second Jewish Temples. This archaeological dig is part of Israel’s recent efforts to “Judaize” Jerusalem and erase any Palestinian heritage from the city.

American Friends of Ateret Cohanim reported close to $550,000 in 2016 (the most recent filing available). The organization, also known as the Jerusalem Reclamation Project, states that part of its mission is to “provide aid for security equipment in support of the safety and protection of community residents, and provide funds to needy families for housing renovations and repairs.” US Ambassador David Friedman, left, talks to casino magnate Sheldon Adelson at an event in the Palestinian neighborhood of Silwan. Tsafrir Abayov | AP

The Cherna Moskowitz Foundation, the Jewish Communal Fund, and the Mermelstein Foundation have all donated to the American Friends of Ateret Cohanim. During the five years examined, the charity belonging to Irving Moskowitz’s wife, Cherna, gave the most with a total of $775,000.

These foundations, along with American Friends of Ateret Cohanim and Friends of Ir David, are tax-exempt entities. The organizations whose contact information is available did not respond to requests for comment.

Nachalat Shimon is even less transparent than Ateret Cohanim and Elad. According to documents obtained by Peace Now, Shimon Hazadik Holdings LTD is registered in the Israeli Corporation Authority as the owner of Nachalat Shimon.

While Nachalat Shimon, Ateret Cohanim, and Elad are the primary entities behind the current evictions, the Jewish National Fund (JNF) has also been involved in evicting Palestinian families, specifically by collaborating with Elad.

The JNF markets itself as an environmental organization helping to green Israel’s landscape. In reality, JNF has uprooted Palestinian communities since before Israel became a state.

A +972 Magazine investigation found that JNF has cooperated with Elad lawyers for decades to evict Palestinian families in Silwan. Historical documents indicate that the JNF purchased Palestinian properties in Silwan through its subsidiary, Hemnutah. Hemnutah then works with Elad on eviction proceedings. In coordination with the JNF, Elad is attempting to evict the Sumarin family from their home in Silwan.

Since Israel’s inception, the state has overwhelmingly relied on American dollars to maintain its occupation of Palestine and the Syrian Golan—whether that’s through military aid or donations to Jewish settlements. Brian Reeves, Peace Now’s director of Development and External Relations, attributes this to the U.S. having the world’s largest Jewish population outside of Israel.

“Israel would not be a country today—100%— if it did not come from foreign funding from the United States,” Reeves said.

“And the United States has continued to invest billions of dollars per year in philanthropic work in Israel,” Reeves added.” “While a lot of that money might sound like it’s going toward archeology and things we all support, it’s actually going to right-wing organizations that are exploiting the archaeology for ideological reasons at the expense of the local Palestinian population.”

While Israeli organizations on the right and the left obtain financial support from the U.S., Reeves pointed out that conservative causes secure substantially more.

“For right-wing people, Israel is their pet project so they’ll put a disproportionate amount of their allocations and philanthropic work toward Israel,” Reeves said.

As an Israeli, though, Reeves’ main concern is how the influx of foreign wealth is subsequently driving the nation’s priorities.

“Coming from an Israeli perspective, how do we feel about the fact that our own politics, media, and country’s agenda is largely influenced by both right-wing Jewish and evangelical funding?” Reeves said. “Imagine if [President Joe] Biden was funded for the most part by outside private donors in foreign countries. It would just be absurd.”

“It’s infringing on our sovereignty and we’re letting it happen.”

Jessica Buxbaum is a Jerusalem-based journalist covering Palestine, Israel and Syria. Her work has been featured in Middle East Eye, The New Arab and Gulf New

The post Revealed: Israeli Settler Groups With Ties To the US Are Evicting Palestinians in Mass appeared first on MintPress News.