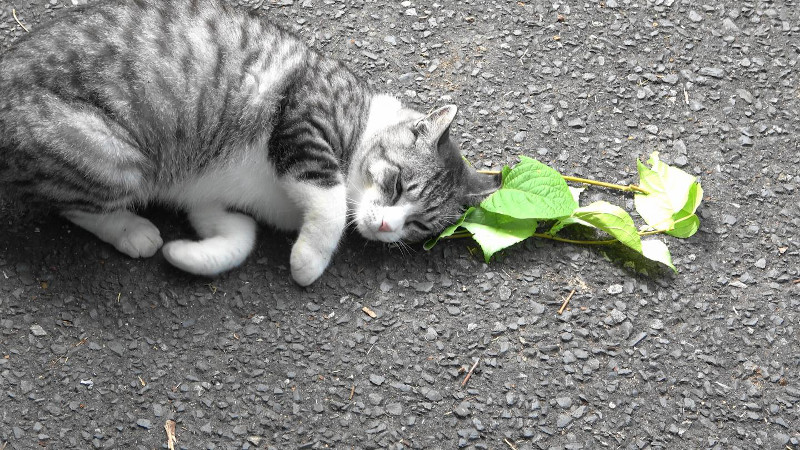 Catnip and silver vine have been known as cat attractant plants. Cat lovers use dry leaves of these plants and toys stuffed with the leaves to give joy to their pet cats. But how does this work? What is the biological significance of the responsive behavior? A research group at Iwate University, Nagoya University, Kyoto University, and University of Liverpool found that the behavior had more practical reasons than getting euphoria.

“The first appearance of silver vine (“Matatabi” in Japanese) as a cat attractant in literature in Japan dates back to more than 300 years ago. A folklore Ukiyo-e drawn in 1859 shows a group of mice trying to tempt some cats with a smell of silver vine. Still, benefits of the cats’ response had remained unknown.” says Prof. Masao Miyazaki of Iwate University, a leader of the research project.

“We applied nepetalactol to laboratory paper filters and tested with eighteen laboratory and seventeen feral cats. They displayed the typical response to silver vine. We also tested the substance with larger, non-domestic cats (jaguar, Amur leopard, and Eurasian lynx). They showed a similar reaction. We concluded nepetalactol is responsible for the typical feline reaction to silver vine,” said Reiko Uenoyama, the paper’s first author.

The second important finding by the researchers is the biological mechanism of the response by feline animals to silver vine. They hypothesized that the μ-opioid system, which is associated with euphoric effects in humans, is activated with the plant. “We tested β-endorphin levels before and after nepetalactol-induced response in cat blood. We found that silver vine activates the nervous system that is responsible for the euphorigenic reaction,” said Miyazaki.

Does this mean cats play with silver vine to get euphoria? Alternatively, does silver vine has another function to cats? The research group believed that the plant has another biologically important function as the reaction was already shown in feline animals when they evolved from other species about 10 million years ago.

To examine whether cats purposefully transfer nepetalactol, the research group placed paper filters with nepetalactol on different parts of the cat cage (floor, walls and ceiling). Although cats rubbed their faces and heads on the paper regardless of the place of the nepetalactol paper, they did not show the typical rolling when the paper was placed on a wall or ceiling. When cats rubbed against the nepetalactol paper, the substance was transferred to their faces and heads, indicating that the most important function of rubbing behavior is to apply the chemical to these parts of feline fur.

“Next, we tested the mosquito repellent property of nepetalactol on cats. We counted the numbers of mosquitoes landing on cat heads with and without application of nepetalactol. The mosquitoes landed less on the nepetalactol heads. To see whether mosquitoes react the same in a more natural setting, we compared the mosquito reaction between cats that responded to silver vine leaves and nonresponsive cats. Mosquitoes avoided the responsive cats. From these results, we found that the cats’ reaction to silver vine is chemical defense against mosquitoes, and perhaps against viruses and parasitic insects. This was the most significant finding of our study,” said Miyazaki.

Miyazaki and his colleagues see many possibilities to use the findings in research and practical application. “Why is this reaction limited to cats? Why don’t non-feline animals react to the plant? To find answers, we want to identify the gene responsible for the reaction. The findings of this study may be used in various applications, including development of new mosquito repellant products.”