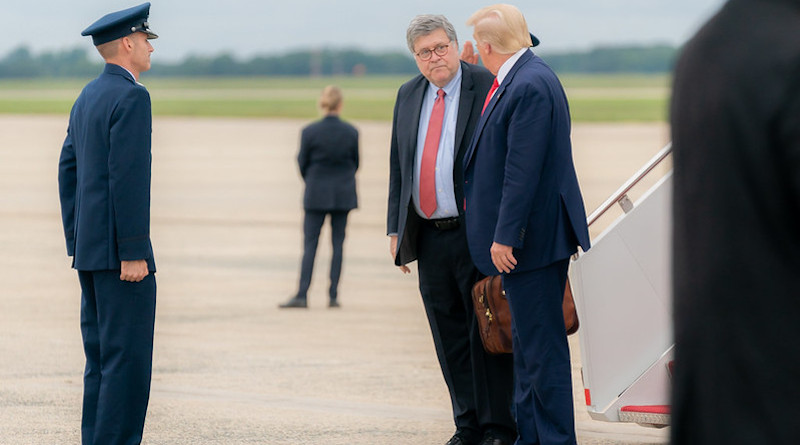 U.S. President Donald Trump has opened a new front in his conflict with Democratic-led cities, ordering top officials to determine whether the national government can cut federal aid to certain municipalities that he describes as “anarchist jurisdictions.”

In a memo Wednesday, Trump directed the White House Office of Management and Budget to offer guidance to federal agencies on cutting funding to cities that “defund” their police departments after weeks of urban protests targeting Trump and police abuse of minorities.

“My Administration will not allow Federal tax dollars to fund cities that allow themselves to deteriorate into lawless zones,” the president’s memo states. “It is imperative that the Federal Government review the use of Federal funds by jurisdictions that permit anarchy, violence, and destruction in America’s cities.”

In addition, Trump ordered Attorney General William Barr to produce a list of localities the Department of Justice considers to be “anarchist jurisdictions” and make it public.

Trump has claimed there is a widespread effort by the Democratic mayors of some of America’s largest cities to defund their police departments, but most have rejected the idea. Some have said they want to redirect some police funding to community-based social programs in hopes that will be a more effective strategy to curb crime.

The president’s action, two months before his November reelection contest against his Democratic opponent, former vice president Joe Biden, is part of his campaign effort to cast himself as a “law and order” candidate and claim that Biden, if elected, would countenance urban turmoil.

Biden has adamantly rejected the president’s assertions about him and says he wants to increase funding to train police officers for the various roles they play in dealing with the public.

In a speech earlier this week, Biden said, “Do I look like a radical socialist with a soft spot for rioters? Really? I want to save America.”

Trump specifically called for a review of federal funding that goes to Portland, Oregon, his birthplace city of New York City, Seattle and Washington, D.C — all places where protests have erupted this summer against Trump and police treatment of minorities.

Office of Management and Budget Director Russell Vought said in a statement: “We are taking action by exploring all options to ensure Federal resources flowing to lawless cities aren’t being squandered. The lack of law and order surrounding these riots, and response from local leadership, is a dereliction of duty.”

The demonstrations were first spawned by the May 25 death of a Black man, George Floyd, while in police custody in Minneapolis, Minnesota. But the protests evolved into a broader concern about racial injustice in the United States.

The U.S. government sends billions of dollars annually to municipal governments, including aid for transportation projects, housing, law enforcement and numerous other programs.

Any attempt at cutting such aid could draw a legal challenge from the affected cities. Congress approves such funding, but administration officials can attempt to cancel certain projects.

At Thursday’s briefing, reporters asked White House Press Secretary Kayleigh McEnany about the breakdown of what funding is under review and the timing of the memo, which comes as cities fight the coronavirus pandemic.

“I can’t give you a read out of exactly which funds are being looked at until that review is conducted. But why now? Why now? Because in New York City you’ve seen a 177% increase in shootings in July. Meanwhile, you have the feckless government of Mayor (Bill) de Blasio and Governor (Andrew) Cuomo pulling $100 billion — with a ‘B’ — from the NYPD,” said McEnany.

“Our cities, and the millions of Americans who we represent, are not President Trump’s political pawns,” they said in a joint statement. “We are confronting unprecedented challenges — fighting back a pandemic and economic devastation without another stimulus. Now, instead of leadership from the White House, we are faced with new attacks that are unlawful, unconstitutional and will be undoubtedly defeated in court.

“President Trump needs to wake up to the reality facing our cities — and our entire country — and realize he is not above the law.”

During his three-and-a-half-year presidency, Trump, with mixed results, also has tried to curb federal funding to what he describes as “sanctuary cities” — municipalities where officials have vowed to not cooperate with federal immigration enforcement agencies trying to detain and eventually deport undocumented migrants, most of them crossing the border from Mexico.

One appeals court ruled the Trump administration was within its rights to withhold some funds, but three other appellate courts ruled against the administration, saying it did not have such authority.

The article Trump Orders Review Of Aid To ‘Anarchist Jurisdictions’ In US appeared first on Eurasia Review.