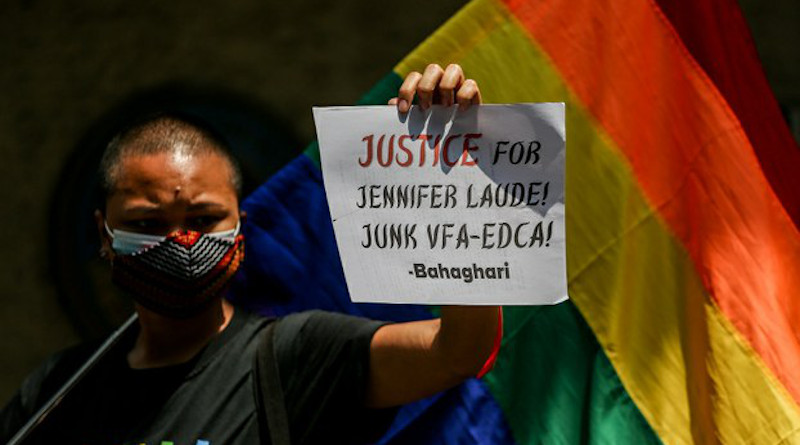 By Basilio Sepe and Jeoffrey Maitem

The Philippines said Thursday that a U.S. marine convicted of killing a transgender woman would remain in prison pending the resolution of an appeal filed by the government and the victim’s family against his court-ordered early release.

The Bureau of Corrections (Bucor) and the Department of Justice said they had put on hold the early release of former Lance Cpl. Joseph Scott Pemberton.

The bureau “respects the court processes and will wait for the resolution of the filed motion for reconsideration,” the agency said in a statement, according to the state-run Philippine News Agency.

A regional court’s decision Tuesday to cut short Pemberton’s 10-year prison term, based on credit for good behavior, sparked anger in the Philippines with many people saying the ruling was an example of a bilateral military pact, the Visiting Forces Agreement (VFA), unduly favoring the United States. The Philippines, a former U.S. colony, until the early 1990s was home to two of the largest American military bases overseas.

Roque said the court ruling would likely strengthen President Rodrigo Duterte’s resolve to end the pact, because the slaying of victim Jennifer Laude was “symbolic of the killing of the sovereignty of the Philippines.”

“What the judge did – giving credits for good conduct – is an instance of judicial overreach,” Roque said, who is a former lawyer for Laude’s family.

In January, the Philippine president threatened to terminate the VFA with Washington but put that plan on hold in June.

Since assuming office as President in 2016, Duterte has sought to distance himself from the U.S. and instead strengthen ties with Washington’s rivals, China and Russia.

Roque said the prison bureau, an agency under the Department of Justice, had recommended that Pemberton’s sentence not be reduced.

“I’m speaking as the [Presidential] spokesperson. It appears that the decision of the court is contrary to the recommendation of the Bureau of Corrections,” said Roque.

Department of Justice spokesman Markk Perete told reporters the government had already filed its appeal against Pemberton’s release, and for now, the former U.S. serviceman would remain in detention. Pemberton is imprisoned at a Manila military camp guarded by both Philippine and U.S. security personnel, as per the terms of the VFA.

On Sept. 1, the Olongapo City Regional Trial Court’s order said that after Pemberton was credited an allowance for good conduct during his sentence, it considers that he has served his full sentence for the killing of Laude six years ago.

In 2014, Pemberton, who was then 19 years old, was in the Philippines as part of a U.S. contingent conducting military exercises.

He met Laude at a nightclub in Olongapo, in Central Luzon. The two went to a motel where she later was found dead with her head pushed into a toilet, according to court records. Pemberton was seen leaving the hotel.

The court’s ruling Tuesday ordering Pemberton’s early release led to protests and condemnation by nationalist and leftist groups in the days after.

On Thursday, members of the LGBT community protested outside the justice department, carrying banners demanding that the former U.S. marine be kept in prison.

“Pemberton was sentenced to 10 years in prison but his ‘hate crime,’ which he committed in ‘self defense,’ has so far resulted in less than six years of punishment,” she said.

“The swiftness by which our institutions have acted on a white, male American’s case is a privilege that is never accorded to many Filipinos.”