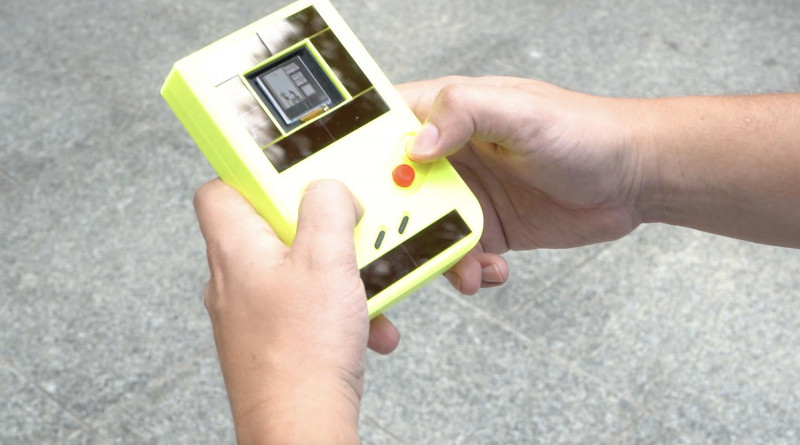 But this Game Boy is not just a toy. It’s a powerful proof-of-concept, developed by researchers at Northwestern University and the Delft University of Technology (TU Delft) in the Netherlands, that pushes the boundaries of battery-free intermittent computing into the realm of fun and interaction.

Instead of batteries, which are costly, environmentally hazardous and ultimately end up in landfills, this device harvests energy from the sun — and the user. These advances enable gaming to last forever without having to stop and recharge the battery.

“It’s the first battery-free interactive device that harvests energy from user actions,” said Northwestern’s Josiah Hester, who co-led the research. “When you press a button, the device converts that energy into something that powers your gaming.”

“Sustainable gaming will become a reality, and we made a major step in that direction — by getting rid of the battery completely,” said TU Delft’s Przemyslaw Pawelczak, who co-led the research with Hester. “With our platform, we want to make a statement that it is possible to make a sustainable gaming system that brings fun and joy to the user.”

The teams will present the research virtually at UbiComp 2020, a major conference within the field of interactive systems, on Sept. 15.

The researchers’ energy aware gaming platform (ENGAGE) has the size and form factor of the original Game Boy, while being equipped with a set of solar panels around the screen. Button presses by the user are a second source of energy. Most importantly, it impersonates the Game Boy processor. Although this solution requires a lot of computational power, and therefore energy, it allows any popular retro game to be played straight from its original cartridge.

As the device switches between power sources, it does experience short losses in power. To ensure an acceptable duration of gameplay between power failures, the researchers designed the system hardware and software from the ground up to be energy aware as well as very energy efficient. They also developed a new technique for storing the system state in non-volatile memory, minimizing overhead and allowing quick restoration when power returns. This eliminates the need to press “save” as seen in traditional platforms, as the player can now continue gameplay from the exact point of the device fully losing power — even if Mario is in mid-jump.

On a not-too-cloudy day, and for games that require at least moderate amounts of clicking, gameplay interruptions typically last less than one second for every 10 seconds of gameplay. The researchers find this to be a playable scenario for some games — including Chess, Solitaire and Tetris — but certainly not yet for all (action) games.

Although there is still a long way to go before state-of-the-art 21st century hand-held game consoles become fully battery-free, the researchers hope their devices raise awareness of the environmental impact of the small devices that make up the Internet of Things. Batteries are costly, environmentally hazardous and they must eventually be replaced to avoid that the entire device ends up at the landfill.

“Our work is the antithesis of the Internet of Things, which has many devices with batteries in them,” Hester said. “Those batteries eventually end up in the garbage. If they aren’t fully discharged, they can become hazardous. They are hard to recycle. We want to build devices that are more sustainable and can last for decades.”