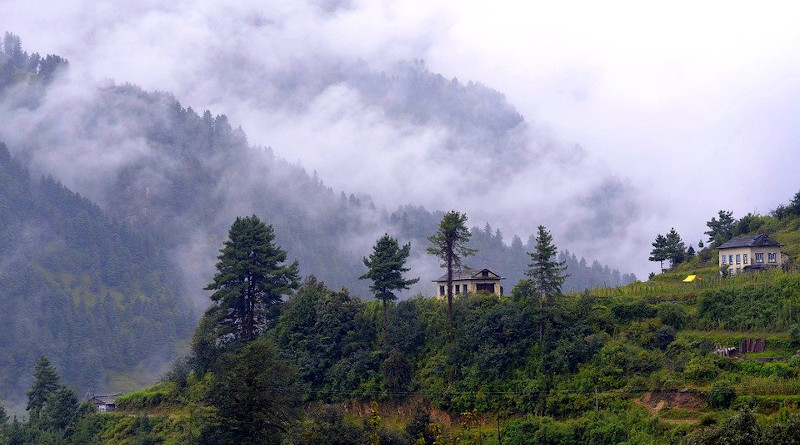 In rural Nepal, 10 years of conflict between government forces and Maoist fighters, followed by a series of devastating earthquakes, forced many young people to migrate to urban areas or overseas in search of employment. Farm sizes remained the same, but with remittance income coming in from migrants plus a sharp reduction in available labor at home, many farmers left some of their land uncultivated.

This expansion of uncultivated land brought an important environmental benefit. After years of forest loss, surveys conducted from 1992 to 2016 found that tree cover—on both state forest land (often managed as community forests) and on private agricultural land—increased by almost 20 percent. At a time when forests are shrinking in many parts of the world due to a combination of logging, land clearing, and climate change, the 20-year trend of increasing tree cover in Nepal stands out as a model for other developing countries.

Today, the COVID-19 pandemic has forced many Nepali migrants to return home. With more available labor and less remittance income, will farmers in Nepal now remove trees on their land to expand cultivation?

The massive impact of outmigration

As of mid-2019, an estimated 3 to 4 million Nepalis were living and working in India, according to the International Organization for Migration. Another 500,000 were in Malaysia, plus large numbers in Qatar, Saudi Arabia, the United Arab of Emirates, and Kuwait. In addition, many young people from the rural areas moved to Kathmandu and Nepal’s other towns and cities in search of employment.

The money these young migrants send to their families back home represents a large portion of Nepal’s economy. According to the World Bank, remittances from workers overseas accounted for nearly 30 percent of Nepal’s Gross Domestic Product (GDP) in 2017, one of the highest rates in the world. Surveys conducted over the 25-year period from 1995 to 2020 found that more than one–half (56 percent) of all households in Nepal had at least one migrant abroad, and foreign remittances accounted for one-fourth of household income.

This extra source of income allowed families to farm their land less intensively. On average, farm households with migrants left about 16 percent of their land uncultivated, prompting a significant resurgence of tree cover.

Some migrants return home, many cannot

In response to the COVID-19 pandemic, strict lockdown measures in many Asian and Near Eastern countries stopped all non-essential service sectors—such as tourism, hospitality, and construction—where many Nepali migrants had found employment. Laid off at short notice, often with no savings, unemployment insurance, or residency rights, migrant workers were left living in crowded housing where they were particularly vulnerable to COVID-19. They were also no longer able to send remittance money home. The World Bank reported that in 2020 Nepal would see remittances fall by about 14 percent.

For its part, Nepal sealed its land borders with China in late January 2020 and later with India. In mid-March, all international flights were suspended, and one week later, the country went into complete lockdown. Although Indian border restrictions were eventually eased for migrants agreeing to undergo quarantine, hundreds of thousands remain stranded overseas.

The government began allowing chartered flights into Kathmandu’s international airport in mid-June, but the task of repatriating workers is far from finished. As of mid-August, fewer than 50,000 Nepalis had returned from the Gulf. The government estimated that between 400,000 and one million others were waiting to return.

Not all Nepalis are ready to return, however. Some cannot afford a ticket on a chartered flight. Some are dissuaded by reports of hardship from those who preceded them, while others remain abroad in the hope they will be able to return to their jobs once the lockdowns are lifted. Given infection rates and options for treatment, many also believe it is safer to remain where they are than to return to Nepal.

Domestically, an estimated 600,000 people left Kathmandu after the lockdown to return to their villages. That flow began to reverse in mid-June when the government eased the lockdown in Kathmandu valley. In late June, more than 45,000 people returned to the city in one week. People are returning for two reasons:  Kathmandu accounts for 42 percent of Nepal’s economic activity, and the city has a lower rate of COVID-19 cases than the country’s most densely populated rural districts.

Some farmers are expanding cultivation

In July 2020, we conducted phone interviews with 30 farmers in Bajura District in far west Nepal and with another 30 in central Nepal’s Kavrepalanchok District. Among the households in Bajura, 44 people had migrated elsewhere for work. They all returned home during the COVID-19 crisis.  In Kavre, 56 people had migrated for work, and 44 of them returned home. Most of the returning migrants are now working on farms.

All the households in both districts saw significant reductions in remittances as well as declines in their own off-farm income because local work opportunities had dried up. Farmers have also found it difficult to buy fertilizer and other agricultural inputs and to take their crops to market.

Other changes since the outbreak of the pandemic may also be putting Nepal’s forests at risk. Alistair Monument, Conservation Impact Director at WWF Asia Pacific, noted in a recent interview that the return of Nepali migrants from India has triggered an increase in illegal logging.

While our surveys suggest that the majority of migrants plan to return to their previous work once the pandemic is over, most will engage in traditional subsistence farming until then. The question today is what will happen to Nepal’s uncultivated farmlands, as well as state forests, now that these migrants have returned home? Will the pandemic cause a long-term loss of tree cover in Nepal, or will it only result in a temporary setback?

*Jefferson Fox is a Senior Fellow, and Phanwin Yokying is a Fellow at the East-West Center. Naya Sharma Paudel is Executive Coordinator of ForestAction Nepal, and Ram Chhetri is a retired Professor of Anthropology at Tribhuvan  University.

The article Another Possible Cost Of COVID-19: Returning Workers May Lead To Deforestation In Nepal – Analysis appeared first on Eurasia Review.