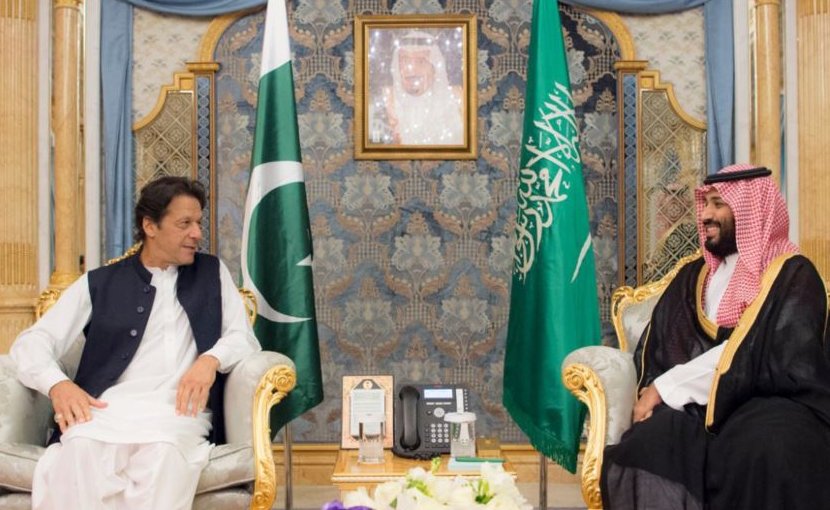 At the heart of the tensions, that potentially complicate Pakistan’s economic recovery, is also India’s ability to enhance Gulf states’ capacity to hedge their bets amid uncertainty about the continued US commitment to regional security.

India is a key member of the Quad that also includes the United States, Australia and Japan and could play a role in a future more multilateral regional security architecture in the Gulf.

Designed as the backbone of an Indo-Pacific strategy intended to counter China across a swath of maritime Asia, Gulf states are unlikely to pick sides but remain keen on ensuring that they maintain close ties with both sides of the widening divide.

The mounting strains with Pakistan are also the latest iteration of a global battle for Muslim religious soft power that pits Saudi Arabia and the UAE against Turkey, Iran, and Asian players like Indonesia’s Nahdlatul Ulama, the world’s largest Islamic movement.

A combination of geo- and domestic politics is complicating efforts by major Muslim-majority states in Asia to walk a middle line. Pakistan, home to the world’s largest Shiite Muslim minority, has reached out to Turkey while seeking to balance relations with its neighbour, Iran.

The pressure on Pakistan is multi-fold.

Pakistani Prime Minister Imran Khan charged recently that the United States and one other unidentified country were pressing him to establish diplomatic relations with Israel.

Pakistani and Israeli media named Saudi Arabia as the unidentified country. Representing the world’s second most populous Muslim nation, Pakistani recognition, following in the footsteps of the UAE and Bahrain, would be significant.

Pakistan twice in the last year signalled a widening rift with the kingdom.

Mr. Khan had planned to participate a year ago in an Islamic summit hosted by Malaysia and attended by Saudi Arabia’s detractors, Turkey, Iran and Qatar, but not the kingdom and a majority of Muslim states. The Pakistani prime minister cancelled his participation at the last moment under Saudi pressure.

More recently, Pakistan again challenged Saudi leadership of the Muslim world when Foreign Minister Shah Mahmood Qureshi complained about lack of support of the Saudi-dominated Organization of Islamic Cooperation (OIC) for Pakistan in its conflict with India over Kashmir. The OIC groups the world’s 57 Muslim-majority nations. Mr. Qureshi suggested that his country would seek to rally support beyond the realm of the kingdom.

Turkish President Recep Tayyip Erdogan, on a visit to Pakistan earlier this year, made a point of repeatedly reiterating his country’s support for Pakistan in the Kashmir dispute.

By openly challenging the kingdom, Mr. Qureshi was hitting Saudi Arabia where it hurts most as it seeks to repair its image tarnished by allegations of abuse of human rights, manoeuvres to get off on the right foot with incoming US President-elect Joe Biden’s administration, and fends off challenges to its leadership of the Muslim world.

Pakistan has not helped itself by recently failing to ensure that it would be removed from the grey list of the Financial Action Task Force, an international anti-money laundering and terrorism finance watchdog, despite progress in the country’s legal infrastructure and enforcement.

Grey listing causes reputational damage and makes foreign investors and international banks more cautious in their dealings with countries that have not been granted a clean bill of health.

Responding to Mr. Qureshi’s challenge, Saudi Arabia demanded that Pakistan repay a US$1 billion loan extended to help the South Asian nation ease its financial crisis. The kingdom has also dragged its feet on renewing a US$3.2 billion oil credit facility that expired in May.

In what Pakistan will interpret as UAE support for Saudi Arabia, the Emirates last week included Pakistan on its version of US President Donald J. Trump’s Muslim travel ban.

Inclusion on the list of 13 Muslim countries whose nationals will no longer be issued visas for travel to the UAE increases pressure on Pakistan, which relies heavily on exporting labour to generate remittances and alleviate unemployment.

Some Pakistanis fear that a potential improvement in Saudi-Turkish relations could see their country fall through geopolitical cracks.

In the first face-to-face meeting between senior Saudi and Turkish officials since the October 2018 killing of journalist Jamal Khashoggi in the kingdom’s consulate in Istanbul, the two countries’ foreign ministers, Prince Faisal bin Farhan and Mevlut Cavusoglu, held bilateral talks this weekend, on the sidelines of an OIC conference in the African state of Niger.

“A strong Turkey-Saudi partnership benefits not only our countries but the whole region,” Mr. Cavusoglu tweeted after the meeting.

The meeting came days after Saudi King Salman telephoned Mr. Erdogan on the eve of a virtual summit hosted by the kingdom of the Group of 20 (G20) that brings together the world’s largest economies.

Added Imtiaz Ali, another analyst: “In the short term, Riyadh will continue exploiting Islamabad’s economic vulnerabilities… But in the longer term, Riyadh cannot ignore the rise of India in the region, and the two countries may become close allies – something that will mostly likely increase the strain on Pakistan-Saudi relations.”